While Modi and Xi were busy at Mahabalipuram 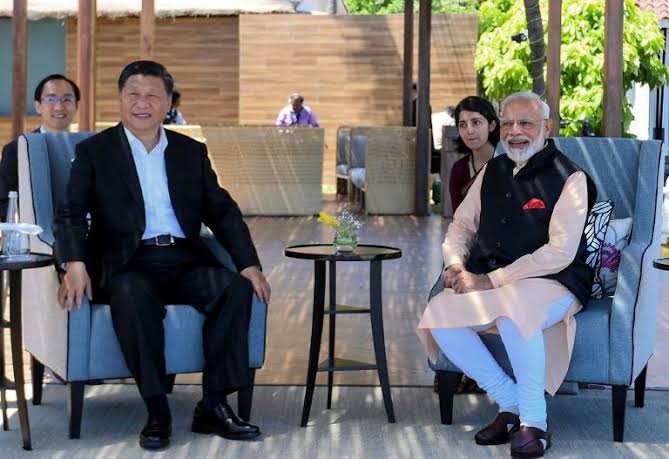 Modi and Xi were busy at Mahabalipuram fixing the two thousand plus years of recorded Civilizational Connect. Did they get the ancient wire’s ends? Who knows? Nothing has been put down in writing.

There have been few similar occurences in the past that makes it look as if there were some connects in the past. Difficulties of distance and travel prevented any physical contact. Yet similar bulbs flashed in few brains that mattered, alike across the mountains, oceans, deserts and plains.

Like the Indian Buddhists, the Chinese did not go for the Creation Theory, as they did in the Brahmanic and Abrahamic cultures, that the universe was created by the God. Indian Buddhist and the Chinese thought that universe just happened and no one was its creator. That did away with the concept of God. They also shared the belief that it is more essential to look after the earthly affairs than bother about things beyond it.

Then the Chinese get very close to the Brahmanic dismemberment myth in the Purush Sukta of the Rig Veda.When the gods hacked the sacrificial victim and from the mouth came the priests, from the arms came the warriors, from the thighs came the traders and from the feet came the all serving and suffering serfs.

Similarly the Chinese have a decomposing myth. When the body of lanky Pan Gu the mythical man died and his body was left to decompose, many things came out of that decomposition, like wind and cloud came from breath, from voice came the thunder, from the eyes sun and the moon, four limbs and five torsoes went to make four poles and the five mountains and blood turned into rivers and muscles in to the soil, hair and beard became the stars and the planets, his skin and hairs on it, turned into grass, teeth and bones became the bronze and the jades, sweat became rain and the lakes, essence and marrow became pearl and gemstones, various worms of his intestine when touched by wind became the black-haired commoners.

Brahmins are blamed for their conceit of dragging out the wretched sudra from the feet of the sacraficial victim, is nothing before the arrogance of Chinese Literati who could conceive an origin of their raven haired unregarded commoners from the intestinal infections of a decaying corpse. Let us thank heavens for their small mercies sometimes.

Then the respect for the ancestors, the Chinese call it Qingming Festival and here it is Pitrapaksha, fortnight of the ancestors.

Chinese clean the graves of their ancestors and burn items of common use made of paper and pay obeisance to their dead elders and the five legendary emperors, followed by family feast and picnic.

We call it Shraddh and gift real items to the Brahmins and feed them nice tasty food hoping our hungery “pitters” will atleast get a bite. And pray for the well being of the departed souls in the other world.

We have some bit of connect with Central Asians – Europeans, certainly some common links with their languages and the honorific Aryas. But it is known that Indo-European consumed their dead.

Burning the dead on the pyre is part of that horrible past still preserved.Certainly cannibalism is not there now but some sect called Aghories, consume human flesh from the burning pyre calling it Mahamans,the great meat.

If such honorific name is attached to it even now then sure in the distant past it may have been quite favoured item! That goes for the respect for our ancestors in past!

May be this ancestor worship came from China and was adopted here. Or it is part of non Indo – European groups contribution to show respect to ancestors, which caught on with the rest.

As there isn’t a mention of such borrowing from any where including the Chinese. So we should see Pitrapaksha as non Chinese and very much Indian. Other wise what a shame it would have been that Chinese came and weaned us away from devouring our dead kins.

We Indian have been very honest about giving back credit of Chinese things to China, unlike the chinese who are known to copy any thing and everything without a copy right.

Like sugar we call Chini as it came from China in the white crystal form. Molases reached China from India. The Chinese’s emperor ate it and liked its sweet taste. But he did not like its look as it resembled human crap.

So he tasked his alchemist to make it look good and retain its sweet taste.The alchemists refined it into its crystal form as sugar and we still call it Chini.

Likewise silk came from China and was called Chinpattu. xportt of silk worm was banned in China and voilator of the rule could invite death penalty.

Silk worms were smuggled from China by a monk, hidden in a bamboo shaft via Yunnan and Myanmar to India on the south eastern silk route that passed through Pataliputra.

May be first silk thread took shape out side China in Champa, that is modern Bhagalpur in Bihar and from there it may have spread to rest of India.

Another common thing between us and them was tuft of hair at the back of skull.It was there in India and is still in practice. It had vanished a bit, but with the wind of Hindutva blowing high these days, it is back in fashion.

Chanakya had kept it loose with a vow to finish the Nand rulers from Magadh. When emperor Nanda insulted him and pushed him out from the row of Brahmins, where he had thought he could sit and dine being superior to them in knowledge and skill, being just a Karanam, the scribe.

The Chinese were forced to adopt this hair style by their non Han Manchu rulers.It was a sign of subjugation imposed upon them. It was long and woven in a plait. It went with the Manchus in 1911.

But we continued it and it is coming back. May be, it went to Manchuria through Tibetans and Mangols along with the Vajrayan sect of Buddhism.

Engineering skills come naturally to the Chinese as conceptual things come to the Indians. So the Chinese constructed Great Wall of China, the only object seen from the moon on earth and Indians invented Zero,without which no one could reach the moon to see the great wall.

The chinese in past have invented many small and big things, like gunpowder, paper, kite, printing, magnetic compass, wheel borrow etc etc, more then 26 such items in distant past, they are the ancient Master Tinkers of the world.

And can easily copy anything and every thing of others with out a hiccup! That is why in such a short span, they have become the manufacturing hub of the world.

And we took lead in IT.

Hope we think good things alike and work together in present as well.