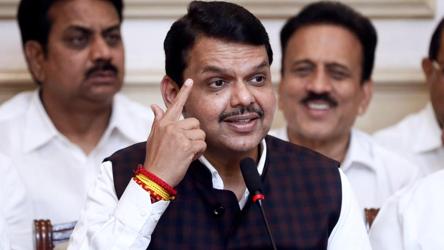 There have been number of posts recently related to murder of democracy a la swearing of Fadnavis early morning by Governor and revoking of president rule by PM under his extraordinary powers.

‘Democracy has been murdered’, cried all pol parties and media alike. When three parties having about 50 MLAs or less each come together to form govt, is it saving of democracy? Cong,SS and NCP have nothing in common in terms of ideology or objective.

The only common thread is that all three are family controlled enterprises. SS has been right wing hinduttava party all along and has been calling names to dynasty members for a long period of its existence and was involved in engineering communal violence in Mumbai.. Shiv Sena has suddenly become secular in a day. How is it possible to change ideology in one day?

Machiavellian Sharad Pawar had pathological dislike of Sonia Gandhi and wanted only native Indian as PM, had left Cong and made NCP in 1999 along with Sangma and Tanwar. Now all three parties have come together with unchallenged supreme leader Sonia Gandhi as Head Lady.

So who murdered democracy remains mystery. A party with 50 MLAs forming govt or a party with 105 MLA not forming govt? Who had mandate to form govt from people of India?

Similar govts have been formed in many states by BJP or Cong or even regional parties. Our MPs, MLAs, ministers have enacted funny rules and laws to suit them. In many states like UP and Haryana income tax of ministers is paid by state exchequer.

In some states even if a man remains CM, or Dy CM for one hour, he gets lifetime free furnished house, free medical here and abroad and handsome pension which even Cabinet Secretary and Generals don’t.
Where does it leave our democracy? Who is really strangulating the democracy? I can venture to voice my one bit opinion.

1.Our constitution makers were the first lot to seriously injure democracy by a plaguarised document known as constitution of India. The provisions like federal structure, universal franchise, fundamental rights, directive principals of state policy were too much to be undestood, imbibe and assimilate by uneducated, illiterate and (1000 yrs) enslaved people of India. Preamble state,” We the people of India…….give to ourselves this constitution”. Did we give it to ourselves? How did it happen? Was there refrendum ever ? How then did we give it to ourselves? We did not. So the first bullet was fired by constitution makers

2. Judiciary has played active role in strangulation of our democracy. SC enjoys vast powers ( more than any other court in the world ) and can take suo motto cognisance of any offence committed any where in India. Why did SC not deem it appropriate to correct wasteful expenditure of public money by pol parties? Getting life time perks and pension in one day is unheard of anywhere in the world. Why did SC permitventry of dons in polity? Mi Lords failed us like our politicians. Judges fired the second bullet.

3. ICS and IP were steel frame of British governance. But IAS and IPS are not. They are incompetent, greedy and past master in creating obstacles in governance rather then removing them. Bureaucrats fired the third bullet.

All three politicians, Judges and bureaucrats are complicit in murder of Indian democracy which for long is on ventilator.

Majority are corrupt, greedy and incompetent and moreover, not bothered about the progress of the country. Their combined efforts have murdered Indian democracy; not BJP or Cong alone.

It will take herculean efforts and very long time to make ventilated democracy of India to come out of it and become a healthy and robust institution.

Reminds me a urdu couplet of Afsar Merathi *khelna jab unko tufano se aata hi na tha, phir wo kisti ke hamari nakhuda kyon ban gaye* (when they were not capable of playing with the storms, why did they become sailors of my boat?)

*Cry my beloved country because it is your destiny*