With Pan-Islamism & Quid Pro Quo Agenda in Mind, Turkey has Become One of Pak’s Strongest Allies 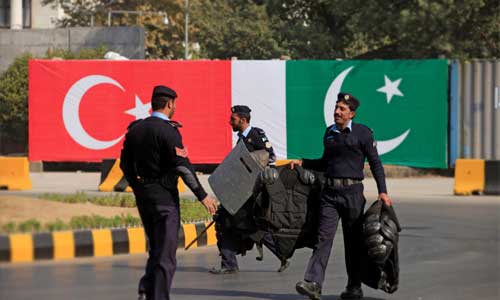 Somewhere in Pakistan, a Turkish couple sat in a café. The woman spoke on a mobile phone, her phone cover painted in the red and white hues of the Turkish flag. Behind her on the wall hung a picture of Pakistan’s founder Muhammad Ali Jinnah. The man asked the waiter for the bill. The waiter went up to the manager and told him, in Urdu, that the couple who had just asked for the bill is from Turkey. The manager quietly handed him a note, which the waiter then handed over to the couple. “Our treat to Turkey,” the note read. The confused couple looked up at the Pakistani waiter who then smiled and said, “Paisay Erdogan sahib nay day diye (Mr. Erdogan has settled your bill).”

This scene was a part of a Turkish TV ad in 2017, a year before Turkey went to polls. The ad also comprised of scenes from different parts of the Islamic world to emphasise to Turks how they had come to be admired by Muslims from all over the world ever since Recep Tayyip Erdogan became their leader. As Turkey’s negotiations to become part of the European Union hit a brick wall, Erdogan has turned his attention to the Islamic world. In these efforts, Pakistan emerged as a major strategic partner. With a clear wish to be a leader for all Muslims, Erdogan found in Imran Khan an ally. It is in this context that Erdogan said “eight million people are under siege” in the Kashmir Valley, which prompted India to cancel Prime Minister Narendra Modi’s scheduled trip to Ankara and call off a $ 2.3 billion defense deal.

“It’s a relationship based on historical ties as well as mutual understanding on practical concerns,” said Qamar Cheema, a Pakistan-based geopolitical strategist. “Erdogan certainly sees himself as the ‘Big Brother’ of the Islamic world. He has spoken out on several instances in which Muslims have been oppressed. He spoke on Rohingyas, Palestine, and even Kashmir,” he added.

In fact, Cheema said, Turkey is Pakistan’s strongest ally in addition to China. “It is a strategic alliance between the two countries. Pakistan’s relationship with Turkey is second only to the one we share with China.”

“Pan-Islamism is the binding factor of this new Turkey-Pakistan relationship,” former Indian Diplomat Vishnu Prakash said. “Erdogan has painted himself as a kind of moderate Islamist leader who has clipped the wings of secularists in Turkey. His is a left-of-center moderate Islamist ideology. He has dreams of being a global Islamic leader now that his dreams of being part of the EU are dashed and Turkey’s honeymoon with the West is over.”

There is also a strategic, practical quid pro quo aspect to this relationship. When Pakistan’s fate hung in the balance at the Financial Task Force (FATF) this Friday, a crucial vote from Turkey neutralized Indian and American efforts to have it blacklisted. On the other hand, Pakistan was among the first countries in the world to say Turkey’s invasion of northern Syria against the Kurdish forces was a matter of “national security”.

“Turkey has legitimate security concerns (with the Kurds). Security threats will not be acceptable to any country,” Cheema said. He added, “Turkey has been a steadfast friend to Pakistan, they have even supported our position on Kashmir.”

The recent warmth and bonhomie between Khan and Erdogan, however, is not without historical context. One school of thought in Pakistan views the country’s Islamic identity as significant to its relation with the Arab world while another sees closer ties to Turkey as the answer.

“Pakistanis feel this relationship really started taking shape during the Khilafat movement of 1919. The relationship between Pakistan and Turkey has been an anti-imperialist one. Many Pakistanis feel that the Ottomans, and later the modern state of Turkey, has supported the Muslims of the Indian subcontinent more than the Arabs have. Besides, after 1947 the common denominator between Pakistan and Turkey was democracy,” Cheema added.

Imran Khan is only the latest in a long line of Pakistani leaders who have expressed their admiration for the iconic Mustafa Kemal Ataturk, the founder of modern Turkey. Pervez Musharraf, Pakistan’s former military dictator, positioned himself as “Pakistan’s Ataturk” – the “great modernizer”. At one point, there were even rumors that Musharraf may follow in Ataturk’s footsteps and declare his country a secular state. But the Pakistani fascination with Ataturk dates back even further.

According to Cheema, Pakistanis see Ataturk and Muhammad Ali Jinnah as reflections of each other. “Both (Jinnah and Ataturk) were progressive and democratic leaders. They were seen as true “Muslim Democrats”. In fact, the relationship between the two has never been strained.”

However, according to Prakash, there is one very crucial distinction between Jinnah and Ataturk. “Ataturk was a modernist. He aggressively neutralised Islamists in Turkey, which is something Jinnah never did in Pakistan. In fact, you could say Ataturk was closer in that sense to [Jawaharlal] Nehru than he was to Jinnah,” Prakash said.

The next phase of the Pakistan-Turkey relationship was kicked off under former Prime Minister Nawaz Sharif. Now, under the current PM Imran Khan it has only strengthened. “The PML(N) government got many projects that started in collaboration with Turkey, including the Metro Bus project and renewable energy work. There has also been cooperation in the defence and tourism sector. Turkey has become one of the top destinations now for Pakistani tourists,” Cheema said, adding, “Imran Khan is hailed as an effective leader by the Turks and that is reflected in the relationship. You saw that recently when Pakistan, Turkey and Malaysia proposed a TV channel to combat Islamophobia in western media.”

Prakash said, “Both nations even have strong military-to-military relations. There may be a certain level of admiration driving this relationship. Ataturk enshrined the role of the military clearly in the Turkish constitution. This is a model that Pakistan has wanted to emulate for a long time.”