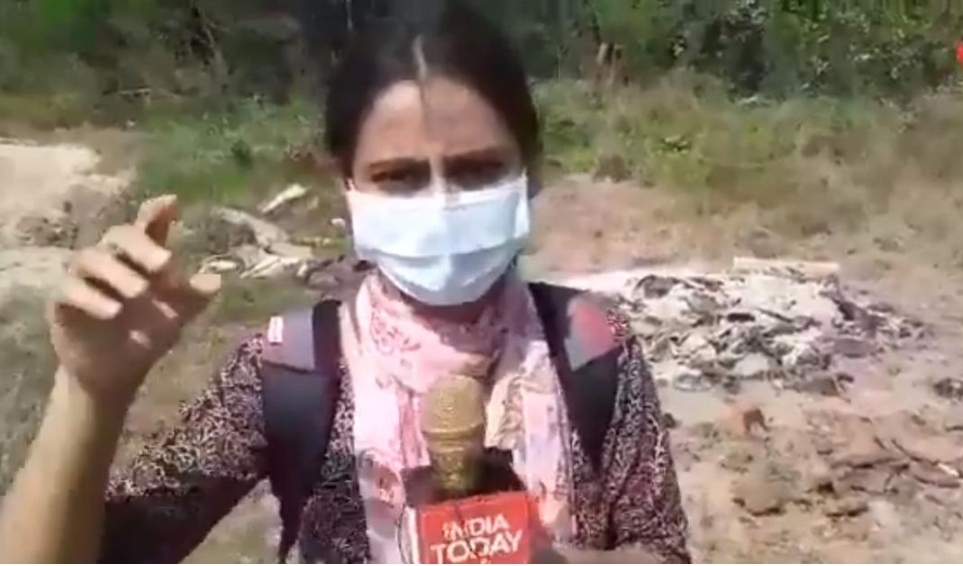 An audio clip appeared on a pro-government website purportedly of a telephone conversation between the journalist and the brother of the dead woman.

Television channel India Today on Friday issued a statement asking the government to explain how a conversation by one of its journalist, who was covering the case of gangrape and murder of a Dalit woman by upper-caste men in Uttar Pradesh’s Hathras, was leaked online. The media group questioned why the woman’s family was under kept surveillance, and the legal basis for recording and leaking the telephonic conversations.

A political controversy has erupted over an audio clip that appeared on a pro-government website and on social media purported to be of a telephone conversation between India Today reporter Tanushree Pandey and the brother of the deceased, Sandeep.

In the clip, Pandey asks Sandeep to send her a video statement of the woman’s father that he was being forced to go to the local police station and sign a document saying they were “satisfied by the police probe” in the case.

Pandey refers to a video of the father shared by Congress leader Priyanka Gandhi. “We are not satisfied with this,” the father said, as per a video shared by Gandhi on Twitter. “My daughter’s case should be probed by the CBI and monitored by a Supreme Court judge. We are under pressure from officials and confined to our home while the media has also been disallowed from meeting us.”

Scroll.in was not able to independently verify the audio clip.

The Bharatiya Janata Party claimed the alleged audio showed how the media was “misreporting” facts about the case and was coercing false statements out of the woman’s family. Appearing for a debate on India Today on Friday evening, saffron party leader Amit Malviya suggested that the ban on the entry of media to Hathras was imposed because of the channel’s false reporting.

“If the media has been disallowed, the credit goes to your channel and its coverage,” Malviya told the channel. “There is an audio of your reporter Tanushree Pandey that has gone viral…your channel has souped out in Hathras and is misreporting. So clearly, the media particularly your group, has not much track record to speak about.”

India Today journalist pesters brother of victim for a confession video of father saying ‘there is pressure from administration’.

In another conversation that appears to be between villagers and Sandeep, the brother is advised not to accept Rs 25 lakhs…https://t.co/aUxl4SUYeg

Malviya also referred to the autopsy reports of the woman that seem to suggest there was no rape. He claimed the woman’s family filed contradictory statements about her death, and therefore the case was a matter of investigation.

India Today rejected the allegations and asked under what authority were phones were being tapped in the first place. “India Today first asks why was the telephone of our reporter, who was covering the Hathras murder, being tapped?” the channel asked. “If it was Sandeep’s phone that was being tapped, then the government needs to answer why are the phones of the grieving victim’s family under surveillance. And under what legal provision of law…”

"You know there is a process to record and tap phone calls, right? You can't be outraging…": @amitmalviya

So snooping and tapping phones is a routine and acceptable practice and need not be questioned. Unbelievable‼ #Newstrack with @RahulKanwal pic.twitter.com/8AhjmuhvnX

Media, politicians barred from Hathras
Hathras was turned into a fortress as thousands of policemen guarded the district’s borders and put up barricades about two kilometres from the village to prevent anyone from entering the area. The woman’s family has alleged that their phones have been confiscated and they have been virtually placed under house arrest, with their outdoor movements confined.

Hathras Additional Superintendent of Police Prakash Kumar told PTI on Friday that no politician or media person will be allowed entry into the woman’s village in Hathras until the Special Investigation Team formed by the Uttar Pradesh government completes its investigation.

Meanwhile, a secretly recorded video of the Hathras District Magistrate Praveen Kumar Laxkar showed him issuing a veiled threat to the Dalit woman’s father, asking him to soften his stance. The father has accused the Adityanath-led dispensation of putting pressure on them.

“Do not finish your credibility,” Laxkar can be heard telling the family. “These media people…some left today and tomorrow more will leave. Only we will be here with you. Ok? It is up to you whether you want to change your statement or not. We can also change.”

The stringent ban on the media in Hathras also came a day after the Allahabad High Court took suo motu cognisance of the Hathras gangrape case and directed top officials of the Uttar Pradesh government and the police to appear before it on October 12.

The High Court division bench comprising Justices Rajan Roy and Jaspreet Singh has stated that they were relying largely on relevant reports in the print and electronic media, the policemen to look into the case. The court noted that the case was of immense public importance and public interest as it involved allegations of high-handedness by the state authorities resulting in violation of basic human and fundamental rights not only of the deceased but also her family members.

Large-scale protests have erupted across the country to demand justice for the 19-year-old Dalit woman, who died earlier this week, a fortnight after she was gangraped allegedly four upper-caste men. Politicians and citizens have severely criticised the high-handedness of the police, especially after they cremated the woman’s body against her family’s wishes.

Amid countrywide outrage over the case, Chief Minister Adityanath had on Wednesday formed a three-member SIT, which was instructed to submit its report by October 14. On Friday, he suspended Hathras Superintendent of Police Vikrant Vir and four other police officers.