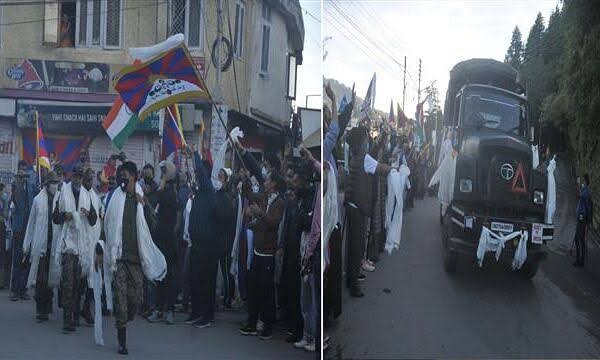 Hundreds of Tibetans carrying the national flags of Tibet and India on Friday gathered in SHIMLA, THE Himachal Pradesh capital to give a warm send off to Special Frontier Force soldiers who were heading in convoys to frontier areas called the Sugar Sector.

Standing on the roadside carrying incense sticks, the Tibetans presented them with the traditional white scarf as a mark of honour.

They raised slogans and sang songs about India-Tibet friendship.

“It is a great moment to see our brothers defending the Indian borders from the repeated incursions by the Chinese army,” an elated Tashi Phuntsok said.

His friend Norbu Wangyal added: “It’s just an occasion to express gratitude to India for hosting us in exile.”

He said the Tibetans are genetically sturdy to take on the Chinese troops in high mountain passes.

The SFF was raised following the 1962 war against China. Initially, the force comprised only Tibetans, but later Gurkhas too were inducted. It was originally known as Establishment 22.

Its unit is deployed on some major high-altitude fronts of the Line of Actual Control (LAC) along the Chinese border.