Tata Group’s announcement came soon after PM Modi’s address to the nation on the escalating Covid crisis where he said the government is trying to meet the huge demand for oxygen. 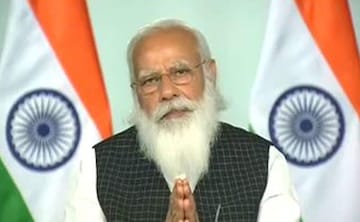 The Tata Group’s announcement on Twitter to import 24 cryogenic containers to transport liquid oxygen was praised by Prime Minister Narendra Modi who called it a “compassionate gesture” as the country battles an acute oxygen shortage due to exploding Covid cases.

The announcement came soon after the Prime Minister’s address to the nation on the escalating Covid crisis where he said the government is trying to meet the huge demand for oxygen.

The conglomerate praised PM Modi’s address to the nation where he likened the second, more deadly wave of coronavirus with a storm.

“PM Narendra Modi’s appeal to the people of India is laudatory and we at the Tata Group, are committed to doing as much as possible to strengthen the fight against COVID-19. To mitigate the oxygen crisis, here is one such effort to boost health infrastructure,” the Tata Group tweeted.

They followed the tweet with: “The Tata group is importing 24 cryogenic containers to transport liquid oxygen and help ease the oxygen shortage in the country.”

Within minutes, the Prime Minister responded to the tweet praising the Tata Group’s newest contribution. The multinational company is known for its contribution to various causes through its philanthropic affiliate Tata Trusts.

As Covid cases exponentially rise in the country, several states have been struggling to keep critical patients breathing during the last week. The states, including Delhi and Maharashtra, flagged the oxygen crisis to the Centre.

Delhi Chief Minister Arvind Kejriwal has even alleged that the Centre has been diverting Delhi’s oxygen stock to other states.

The PM appealed to states to use lockdowns only as the last resort in his Tuesday address as the country battles an unprecedented surge in Covid cases with stricter measures like lockdown and weekend and night curfews. He also stressed on self-discipline to fight the infection, urging people to step out only if necessary.

The Tata Group has since the outbreak of the pandemic last year undertaken several steps to mitigate the crisis. The group had pledged Rs 1500 crore last year soon after the outbreak, and has since then procured ventilators, PPE kits, testing kits when there was a shortage and even built a hospital in Kerala in six weeks.