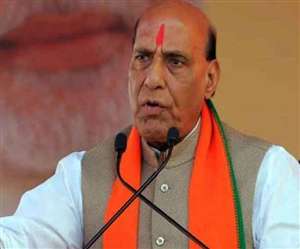 Addressing the Chief Executive Officers (CEOs) of French Defence Industries in Paris, Rajnath Singh called upon the French companies for collaboration to modernise India’s shipyards and defence platforms by infusion of technology and asked them to make India its base for production of defence equipment not only for India’s large market but also for export to other countries, read a statement.

“We have undertaken significant economic reforms to improve the ease of doing business and opening up the economy for investments. Our Government under the leadership of our Prime Minister Modi has opened up defence sector manufacturing to a large extent under the ‘Make in India’ initiative,” Rajnath Singh said.

The Defence Minister underlined the significance of implementation of a single Goods and Services Tax (GST) across India.

“We have recently reduced our corporate tax significantly. For ‘Make in India’ in Defence if there is need for further tax rationalisation, it may be considered suitably,” Rajnath Singh said.

Rajnath Singh applauded the French companies for regularly participating in DefExpos organised in India with great energy and enthusiasm.

He also extended a special invitation to the French firms to participate in DefExpo, which will be held in Lucknow from February 5-8 next year.

“Lucknow happens to be a city of rich culture and heritage and the French people are known to be highly appreciative of great cultures. Lucknow is the capital of Uttar Pradesh which is also a land of new opportunities,” Rajnath Singh said.

Moreover, the Defence Minister highlighted India’s substantial requirement of Aero engines both in civil and military domains. He requested French OEMs to consider exploring development of an Aero-engine complex on government -to- government basis saying French companies could leverage from advantages in India such as low wages and availability of technical manpower, the statement added.