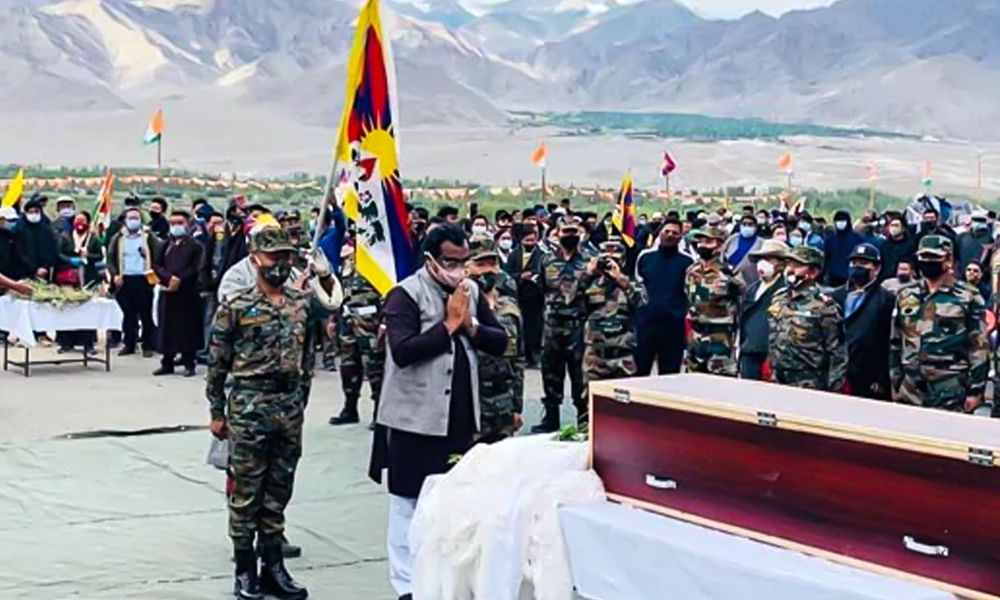 In his tweet, he said such sacrifices of “valiant soldiers” bring peace along the Indo-Tibetan border. “That will be the real tribute to all martyrs,” he had written in the now-deleted tweet

The Special Frontier Force and Indian Army along with members of the Tibetan community on Monday paid tributes to the Special Frontier Force’s (SFF) Deputy Leader Nyima Tenzin, who lost his life in a landmine blast in the LAC area on the south bank of Pangong Lake in eastern Ladakh. Senior BJP leader Ram Madhav was also present at the funeral.

Tenzin was a member of the Tibetan community staying temporarily in Ladhhak, till liberation of their motherland. The Community members came out in full force in Ladakh to pay tributes to him.

Chants of “Bharat Mata Ki Jai”, “Jai Tibet” and “Vikas Regiment Zindabad” reverberated during the funeral procession. Amid the waving of Tibetan flags, Ram Madhav paid his last respects to the martyred soldier and laid a wreath as a tribute.

Notably, in his now-deleted tweet, Madhav referred to the border as “Indo-Tibetan” as opposed to “Indo-Chinese”, sending a strong message to China amid a nearly four-month-long standoff border tension along the Line of Actual Control (LAC). Why he deleted the tweet is not understood. He was absolutely right, there has never been any Indo China Border. It has always been the Indo Tibetan Border and that is why, we have the Indo Tibet Border Police for policing it.

In his tweet, he said such sacrifices of “valiant soldiers” bring peace along the Indo-Tibetan border. “That will be the real tribute to all martyrs,” he had written in the now-deleted tweet.

His presence during the cremation of the soldier is expected to get a strong signal from China, given that Deputy Leader Tenzi who was killed during an operation last weekend and laid to rest at Leh with full military honours this morning, was a Tibetan himself. China considers Tibet as part of its own territory.

Tenzin sacrificed his life during the pre-emptive operation the Indian Army carried out on the southern bank of the Pangong Lake in eastern Ladakh last week to foil a fresh move by the Chinese People’s Liberation Army to transgress into Indian territory. During the operation, another junior soldier Tenzin Loden, 24, was critically injured in the same explosion and is currently undergoing treatment at the military hospital in Ladakh. The injured Tenzin Loden is from the same settlement.