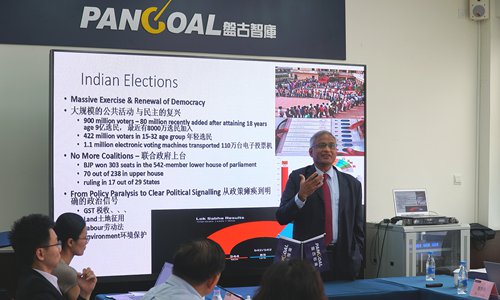 Multilateral cooperation has important role in offsetting US protectionism

Srikanth Kondapalli gives a presentation on China-India relations at the Pangoal Institution in Beijing on Friday.

After Indian Prime Minister Narendra Modi won a second term in office last month when his ruling party claimed a landslide victory in elections, the rest of the world has focused its attention on what foreign policy he will adopt over the next five years.

During a seminar hosted by Chinese think tank Pangoal Institution, Dr Srikanth Kondapalli, a professor in Chinese studies at Jawaharlal Nehru University and India’s foremost China expert, predicted a continuity of Modi’s foreign policy toward China, which will adhere to the spirit of the Wuhan meeting last year.

The Wuhan meeting is viewed as an important step toward improving bilateral relations. According to Kondapalli, the current bilateral differences will not turn into disputes.

While the US recently withdrew preferential trade treatment from India, which later imposed retaliatory tariffs on 28 US goods, Kondapalli told the Global Times that he thinks Modi will still have a “pragmatic policy on approaching the US and have cordial relations with the US.”

“I think Modi will approach the US because the US is still the leader in technology and in investments,” he said.

However, Kondapalli said it is likely that India will try to balance its policy toward the US with its policy toward China and Russia. “[This is] because ­India also has aspirations to becoming a global economy,” he said, stressing that at the same time, this interest could be affected by US unilateral or isolationist positions.

Kondapalli pointed out that many countries today are facing this problem of tariff positions by the US, and the role of China is important in multilateral cooperation to offset the negative impact caused by US protectionist trade policies.

He called for a concrete road map on how to tackle this issue together among countries including China, India and Russia.

“It will take some time because this is a complex issue,” he said.

Kondapalli also noted to the Global Times that the priorities for Modi during his second term are economic development, national security issues and how to restructure Indian society.

As for foreign investment in India, he said, “India has been suggesting that infrastructure is No.1. No.2 is the manufacturing sector.”

He said Modi is also looking to ­develop skills among Indians and turn India into a digital country.

According to Kondapalli, India initially welcomed Huawei’s 5G, but earlier this month he heard that the government would initiate a new 5G for India, which means India is developing its own technology. “I think there will be some sharing between China and India or with other countries like Russia, for example. The beauty of Huawei 5G is it brings down prices. So I think it is very attractive for every country,” he told the Global Times.

He also slammed the use of the term “emerging superpower on the world stage” to describe India, saying the ­country is merely focusing on economic development and national security.

During the interview, Kondapalli played down the possibility of a war between India and Pakistan.

“I don’t think there will be a war because No.1, these are big countries. No.2 is they have ­nuclear weapons. No.3 is we see some sub-conventional conflict, but we don’t see full-fledged warfare between big countries in the 21st century,” he said.

“You can have a war between the US and Iraq because there is so much asymmetry, but in the 21st century it is very unlikely to see big wars between big countries.”