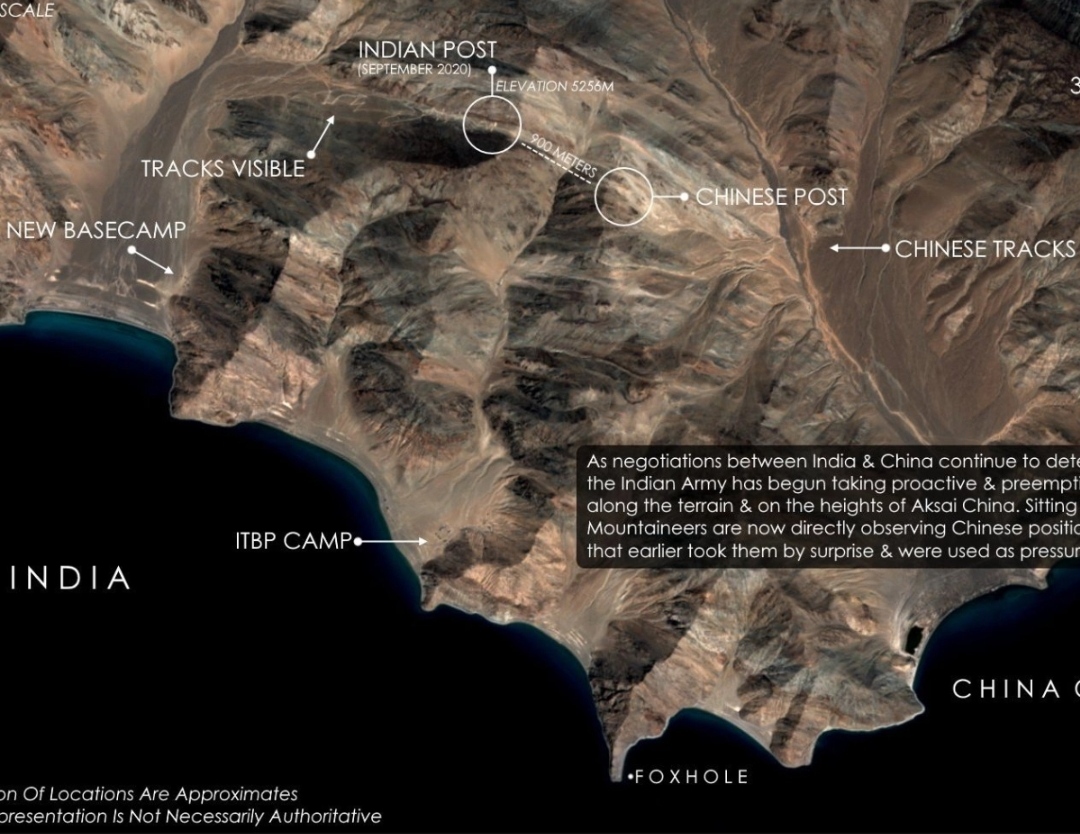 Indian Army now holds posts on the heights at an elevation of around 5,000 metres, South of Pangong Tso. The Indian Army thus has a panoramic view of the Chinese military deployments and camps around the Spanggur Lake, and can, with full awareness, not only defend any attack, if launched but wipe out the Chinese placements in no time.

This happened following an operation undertaken by the Units of the Special Frontier Force operating under the Army and other Army units. This operation took place on the south of the Pangong Lake on the intervening night of 29 and 30 August. Latest satellite images confirm this claim.

A satellite image dated 11 September, posted on Twitter by anonymous satellite imagery expert @detresfa, shows Indian positions near Rezang La and Richen La, two areas in which India is said to have taken positions to dominate the Chinese completely.

Indian Army positions on these heights, the satellite image shows, at around 5,000 metres are about 10 kilometres away from the shore of the Spanggur Lake. The Chinese camps, spread across the area, are located on much lower ground very close to the lake. Thus Indian soldiers are having a clear line of sight and also clear line of fire into the valley where the People’s Liberation Army has its camps.

New tracks linking the new Indian positions on these heights with bases in the rear have already been constructed and are clearly visible in the image, suggesting that the forces have established routes to support these critical positions and keep them fully supplied.

Tracks leading from Chinese camps towards China’s perception of the Line of Actual Control can also be seen in this satellite image. This could be the route used by the Chinese soldiers who tried to close on to the Indian positions early last week but then panicked and withdrew.

From its positions on the heights, Indian soldiers can keep an eye on Chinese movements on the road and in the camps on the shore of the lake. North of Rezang La and Richen La lies the Spanggur Gap, a nearly two-kilometre wide break in mountains opening in the Chushul Valley.

Ladakh’s Chushul Sector. All labels are only for representation and may not be very accurate

The Indian Army has long believed that China, in the event of war, can try to launch an offensive through the Spanggur Gap. To stop the PLA, the India Army has now taken positions on the heights north and south of the Spanggur Gap — Gurung Hill and Magar Hill.

This satellite image, circulating on Chinese social media and posted with annotations on Twitter by handle @detresfa_, shows Indian camps and possible gun positions on Gurung Hill, the height just north of the Spanggur Gap.

While Indian positions are located at an elevation of around 4,700 metres, Chinese camps are at 4,500 metres and only 700 metres away from India’s.

Indian presence on Gurung Hill, however, looks much more robust than the Chinese.

Not only does the Indian Army appear to have a larger number of camps, it also seems to have gun positions which can bring down devastating fire on the Chinese camps and make them untennable.

Other Indian Army positions and tracks are also visible in the image. Indian camps on the Gurung Hill can monitor all Chinese movements towards the Spanggur Gap and target China’s Moldo garrison.