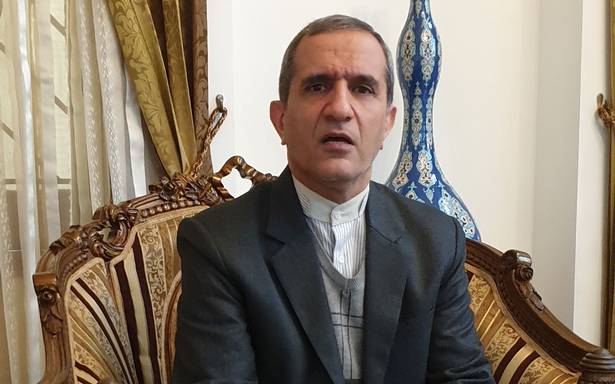 Iran’s Urban Development Minister Mohammad Eslami inaugurated the track-laying ceremony for the second of the three phase construction on 04 Nov20 of Chabahar – Zahedan railway project.. Sixty per cent of the track-laying and about half of the entire project, including infrastructure and superstructure are now complete, and officials say they are on track to complete the whole line by June 2021, which will connect the Chabahar port to the Afghan border, through the existing rail system, to Turkmenistan and Central Asia as well. The first phase was inaugurated in July last, leading to a controversy over the fact that India had been dropped from the project.

India is not a part of the Chabahar-Zahedan railway at present, but as Iran begins the second phase of the 628-km project, Tehran hopes New Delhi will help it procure equipment to run the rail line from the Chabahar port to the Afghan border.

According to a senior Iranian diplomat, Iran’s Port and Maritime Organisation (PMO) recently conveyed to India a request for cranes, tracks, switches and signalling equipment, as well as locomotives that it has had difficulty in procuring them directly due to the U.S.-imposed sanctions. Iran has also asked to activate a $150 million credit line that had been offered by India during Iranian President Rouhani’s visit to Delhi in 2018 to pay for the purchases.

“We are still hopeful that the pledge for the line of credit India made in 2018 [will] pave the way for future cooperation,” Iran’s Deputy Chief of Mission Masoud Rezvanian told The Hindu in an interview, explaining that the 2016 MoU signed with the Indian Railway Construction company (IRCON) was no longer relevant as there had been no progress in talks, and Iranian construction companies have now taken over the project.

According to the Ministry of External Affairs (MEA), IRCON completed the site inspection and feasibility report, and had been waiting for the Iranian side to appoint a nodal authority.

Official sources said the real sticking point was that Iranian construction company Khatam Al Anbyar is under U.S. sanctions for its links to the Iranian Revolutionary Guards Committee (IRGC) and although the Chabahar project has secured a special waiver from the US, the government is hesitant to deal with the IRGC entity.

“We think that we should look at the future instead of digging into the past, where there have been some sources of bitterness,” said Mr. Rezvanian, clarifying that Indian companies played “no role at present” in the railway project. In contrast, the Chabahar port Shahid Beheshti Terminal, operated jointly by India and Iran, had been running smoothly, and had processed more than 12 lakh tonnes of bulk cargo and 8200 containers, according to the MEA.

Delays due to sanctions have also taken a toll on the Indian interest in developing the Farzad-B gas field, where ONGC Videsh made a discovery in 2008, Mr. Rezvanian explained, when asked about reports that Iran would now develop it through domestic companies.

“Iran has frequently said that we cannot wait until sanctions are lifted to develop Farzad B…[] That’s why Iran recently said that we will hand over Farzad-B to an Iranian company, and we will complete exploration and development on our own,” he said.

The issues over India-Iran cooperation are believed to have been taken up during quick stops by External Affairs Minister S. Jaishankar and Defence Minister Rajnath Singh, in Tehran in September in transit to and from Moscow respectively, where they attended the SCO ministerial meet.

The U.S. election results projecting Mr. Biden as the next President are being watched in both India and Iran for the possibility that sanctions on Iran might ease, allowing India to increase its engagement with its traditional partner who used to be a major supplier of oil before the Trump administration forced India to “zero out” imports. New Delhi is also watching negotiations on a 25-year strategic cooperation agreement between China and Iran believed to be worth $400 billion, which could fund other parts of the Chabahar development, including a free trade zone along the Makran coast, and oil infrastructure projects.

According to Mr. Rezvanian, however, the “umbrella agreement” would not impinge on India’s interests in any way.