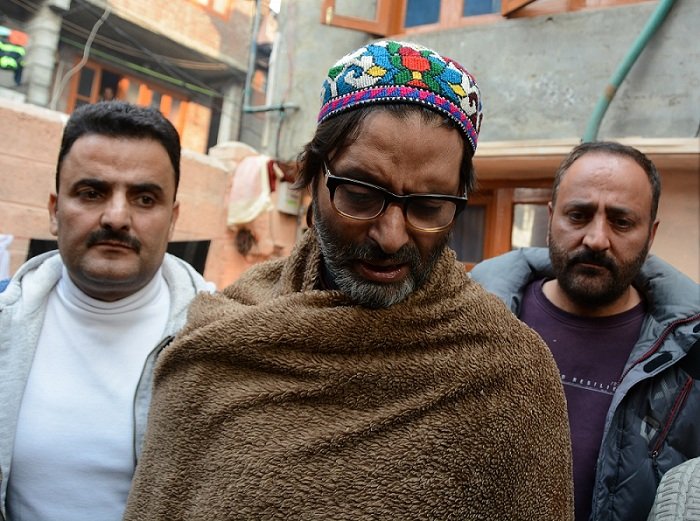 After a wait of more than 30 long years, the wheels of justice have finally come full circle in the case of dreaded Jammu and Kashmir Liberation Front (JKLF) terrorist Yasin Malik.

On Saturday, Presiding Officer of TADA court in Jammu finally framed charges against him along with six others for killing four Indian Air Force (IAF) personnel in cold blood on January 25, 1990.

Imagine the kind of Government in the Centre and the State of J&K who could not get hold of this vile terrorist.Despite running from pillar to post the family members of the martyred IAF officers failed to get justice. Probably the Central Government of time was testing the patience of the Armed Forces.

The investigating agency had presented the chargesheet in the court of law on 24 November 1990. But his sympathisers, occupying high offices, shielded him and delayed justice. Kudos to our Armed Forces thst they did not decide to arrest this terrorist and try him themselves.

In 1994, Malik started propogating a myth that he has renounced violence and adopted peaceful methods to come to a settlement on the Kashmir conflict.

Instead of punishing him, the perpetrator of the heinous crime was hailed as a peace ambassador and accorded red carpet welcome in higher echelons of power even in New Delhi.

In 1995, Yasin Malik was granted a stay on trial by a single bench of the Jammu and Kashmir High Court as there was no TADA court in Srinagar.

In 2008, Malik again moved a fresh application before the special court demanding the trial should be shifted to Srinagar as he was facing security threats in the wake of Amarnath land row in the Jammu region.

In April 2019, a bench of the Jammu and Kashmir High Court struck down the 2008 single-bench order transferring the hearing in the two cases to Srinagar. In September 2019, Jammu based TADA court went ahead and issued non-bailable warrants against the JKLF Chief and directed the police to produce him before the court. At present, Yasin Malik is lodged in Delhi’s Tihar jail after being arrested by the National Investigation Agency (NIA) in a case related to the financing of terror and separatist organisations.

After hearing senior lawyers, the Presiding Officer TADA Court observed, “CBI appears to have supported their allegations against the accused, both, by the documentary as well as oral evidence”. On mild sifting and evaluating the confessional statements of the accused Shoukat Ahmed Bakshi, Ali Mohd Mir, Javed Ahmed Zarger & Mohd Rafiq Dar as recorded in terms of Section 164 of Code of Criminal Procedure and those recorded of the accused Manzoor Ahmed Sofi alias Mushtafa and Mushtaq Ahmed Lone, in compliance to the relevant provisions of Section 15 of TADA Act, it can safely be considered as an incriminating material against all the accused as they have divulged about the hatching of criminal conspiracy punishable under Section 120- B of RPC”.

“They have further confessed that in furtherance of the conspiracy, crime was committed by them, in the present matter.

Similarly, the verbal version of the witnesses namely Hafiz-Ullah Bhat, Javed Ahmed Shah, Ghulam Mohd Bhat, Nazir Ahmed Shah, Mohd Khalid Jan and Abdul Rehman Sofi as recorded in terms of Sections 161 of Code of Criminal Procedure, supports the contention of the CBI as to the existence of a prima facie case against the accused”, the Presiding Officer said, adding “I am in agreement with the prosecution that contradictions as projected by the defence counsel in the site plan of the place of occurrence and the seizure memo, would be explained by the witnesses, in the currency of their examination”.

The Presiding officers also observed, “It is to elaborate that there is sufficient evidence, available, in this regard, in the form of confessions of the accused and of the statements of the prosecution witnesses. Non conducting of Test Identification Parade of the accused – Yasin Malik, Javed Ahmed Mir alias Nalka & Nana Ji alias Saleem loses its importance, in the existence of sufficient other evidence available in the CBI charge sheet in the shape of confessional statements of the co-accused and statements of the prosecution witnesses as recorded in terms of Section 161 of Code of Criminal Procedure”, the court said.

In other words, their complicity in the crime, in the present matter, can prima facie, be worked out, from the evidence available on the CBI charge sheet.

FACTS OF THE CASE AS EMERGED AFTER THE INVESTIGATION BY THE CBI ::

One of the accused- Shoukat Ahmed Bakshi twice visited Pakistan firstly in the month of April- May 1989 and secondly in September-October 1989 and met with the accused – Aman – Ullah Khan and hatched a criminal conspiracy to attack the security forces including Air Force officials, stationed at Srinagar, in order to create terror among them and in the mind of the general public.

To help them execute their terror plans, Dr. Ghulam Qadir Sofi provided his residential accommodation situated at Hakam Bagh Rawal Pora to be used as a hideout for making plans and preparation by the accused persons and for keeping the illegal arms and ammunitions therein.

Simultaneously, they procured a blue-colored Maruti Car having No. JKE- 3575 from the accused – Ali Mohd Mir.

On 25.01.1990 at around 7.30 am, accused- Yasin Malik and Javed Ahmed Mir each armed himself with Klasnikov Rifles, boarded as a pillion riders on the motorcycle having No. JK D-3705, being driven by the accused- Mushtaq Ahmed Lone, who was armed with.30- bore pistol & proceeded from the hideout towards the pick-up points of Air Force personnel located near Rawal Pora.

Thereafter, after driving the motorcycle ahead, they found two more Air Force officers namely B R Sharma & R.K Khanna, who were also fired upon. With the result, both suffered grievous injuries and one of them namely- R.K Khanna succumbed to these injuries on the spot.