The Striker In Chief Strikes Terror In the Heart of Terrorists and Their Sponsors Across The Border : Lt General Paramjit Singh Sangha

The top Army officer for the entire Jammu of J&K ,who is also the Security Advisor to Govt of J&K has reiterated that Army would not allow revival of terrorism in Jammu region including the mountainous Kishtwar district. The beautiful valley of Kishtwar witnessed killing of four persons including two senior leaders of BJP and RSS since November last year. 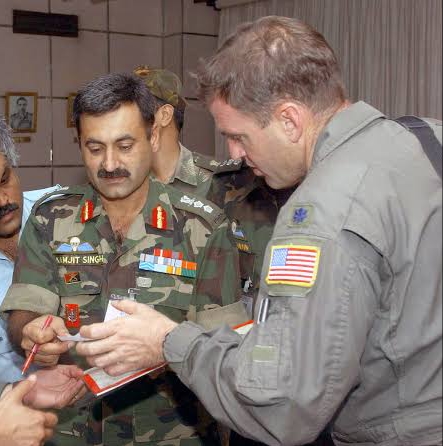 Lt General Paramjit Singh Sangha of 9 PARA SF, commanded 4 PARA SF, the two Striking Units of the Surgical Strikers and was the Chief Operational Planner of the SF Surgical Strike, as the Chief of Staff, HQ Northern Command. Lt General Hooda was the Army Commander. General Paramjit is also the current Colonel of the Parachute Regiment which also has the 21 PARA SF , the unit which carried out strikes in Myanmar .

General Paramjit was selected for 9 PARA SF in 1983where he came for probation with one year service from MADRAS Regiment. The SF philosophy is in his blood and not glimpsed from books and GS pamphlets like other Generals. He himself has done Combat Free Fall, is a missike pilot and also a Black Belt in Karate. Most of his service has been spent in J& K and thus is more of a Kashmiri than many Kashmiris, who probably have spent more time in London than Srinagar.

So while General Hooda gave his consent to the Surgical Strike plan, the COAS the final Go ahead, the Raksha Mantri the final clearance based on political Clearance of the CCS headed by the PM, it was General Paramjit and the Operational Branch of HQ Northern Command which made the plan.

“The incidents which had happened in Kishtwar in the recent past are a matter of concern. The enemy always try to revive terrorism in the areas where it was wiped out but we are ready for the challenge and I want to assure the people if the intention is to revive terrorism, we will not allow it to happen,” said the General interacting with media persons in Rajouri district.

The communally sensitive Kishtwar district, which was declared terrorism-free over a decade ago, was rattled by the killing of State Secretary of BJP Anil Parihar and his brother Ajeet Parihar on November 1 last year, followed by assassination of senior RSS leader Chanderkant Sharma and his security guard inside a health centre. On March 8, unidentified gunmen also snatched the service rifle of the personal security officer of district development commissioner, Kishtwar, from his rented accommodation in the town.

“The army has not left this area because the enemy can attempt again to revive terrorism but as long as we stand united, the Pakistan cannot succeed in its nefarious design,” he added.

The officer said the intelligence agencies, police and army have worked out a strategy to deal with the arising situation.

“Some people were already rounded up (in connection with the latest killings) and the operation is going on there (Kishtwar) at the moment,” he said.

When his attention was drawn to the weapon snatching incident, arrest of some militants with weapons and recovery of huge consignment of drugs in Poonch and Rajouri district last year, he said the enemy always try that there be no peace anywhere in the state.

“Such attempts continue on the part of the enemy but we failed their nefarious design with the joint efforts and the support of the public,” he said.

Lt Gen Singh said those people who have seen Rajouri, Poonch and Surankote after 1990 know with everybody’s cooperation –civilian population, local administration, police and army — the terrorism was wiped out from the region.

“There is no place in the country which is free from the danger of an accident,” he said and expressed satisfaction over the peaceful conclusion of the first phase of the Lok Sabha elections on April 11.

In response to another question about the status of militancy in the state post Balakote airstrike, he said “the leadership of Jaish-e-Mohammad outfit was eliminated in the Kashmir valley.”

“As far as Jammu region is concerned, it has not witnessed any major militant activity before or after the airstrike,” he said.

The Army officer said ground reports did not suggest sudden increase in the terror activity by over ground workers of the terrorists in any part of the Jammu region..