A hero disowned by the nation deserves pardon 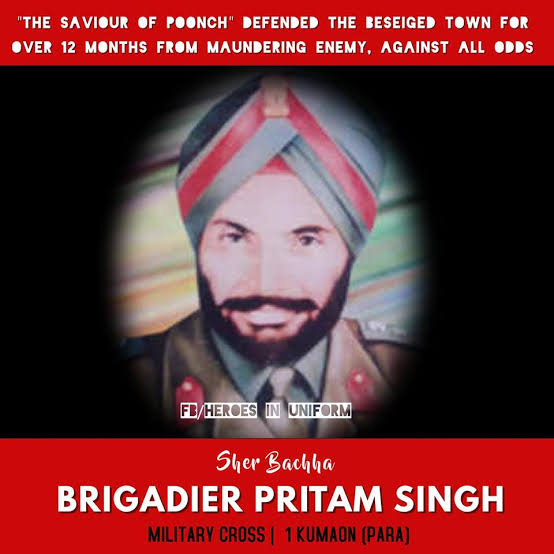 Brigadier Pritam Singh was known as “Sher Bachha” (son of a tiger) because of his outstanding leadership during the siege of Poonch, November 22, 1947, to November 21, 1948.

His career was full of dramatic stories. As a young officer, Brig Pritam Singh was wounded in the battle of Singapore in 1942 and became a prisoner of war (POW).

He escaped from the POW camp and after a gruelling journey of six months through the forests of Burma, landed in Manipur. He was awarded the coveted Military Cross for his great escape.

Five years later, as a Lt Col, on October 30, 1947, he visited the Army Headquarters while on leave. When he heard of the grave situation in J&K, he volunteered to take his unit, 1 Kumaon (Para), to Srinagar. The same evening, he was given his posting order and he landed with his unit at Srinagar the next day – October 31, 1947.

The unit quickly joined the battle at Shalteng along with 1 Sikh. This battle was the turning point of the war and in the next three weeks, the enemy was chased back beyond Uri.

But there was no rest for 1 Kumaon — Pritam Singh was tasked to relieve Poonch, which was under siege, via the Haji Pir Pass.

However, soon the unit itself got besieged. Poonch was held by 1,400 men of J&K Forces that had withdrawn from Mirpur, Kotli and Jhangar. There were 40,000 refugees who had escaped the massacres in these towns.

All surrounding heights around Poonch were held by the enemy. Rations for soldiers and civilians were just enough for one week and ammunition was down to few rounds per soldier.

“Cometh the hour, cometh the man”, and the ‘the man’ was Lt Col Pritam Singh. J&K State Forces garrison was preparing for withdrawal and 40,000 Hindus and Sikhs were awaiting certain death.

Pritam Singh cancelled the orders for withdrawal, immediately reorganized the defences and took charge of the administration. He personally led the attacks on the enemy positions in the immediate vicinity to secure the town.

With help of the civilians, he constructed an airstrip on which the legendary pilot of the IAF, Air Commodore ‘Baba’ Mehar Singh, MVC, DSO, along with Air Vice Marshal (later Chief of Air Staff) Subrato Mukerjee landed in a Harvard aircraft on December 12, 1947.

On the same day, Dakota aircrafts started landing. Mehar Singh soon established an ‘air bridge’ to Poonch with the Dakotas carrying in supplies, guns and ammunition and taking back refugees. The IAF coined the term “Poonching” — the technique of flying in the narrow valleys with transport aircraft.

For one year, a fierce struggle continued at Poonch. At stake was 1,500 square km of territory. Surrounding heights were being captured, lost, to be recaptured again, blows were being absorbed and delivered back with greater ferocity and the battle to secure Poonch was being pursued relentlessly. Pritam led from the front and was wounded in action.

In one year, Singh, cut off from the rest of the country, attacked and secured all the hill features that were threatening Poonch, organized the civil administration and saved the lives of 40,000 Hindus and Sikhs. He was also very fair to the Muslim population. The civilians named this daring officer “Sher Bachha”.

He was finally relieved on November 20, 1948, when the road to Poonch from Rajouri was forced open by a division size force under Brig Yadunath Singh. The siege of Poonch by all standards is one of the greatest sieges in which the defender was victorious.

The end of the war brought up another phenomenon – jealousy and intrigues among the senior officers most of whom had been catapulted to higher ranks without command of units and some without spending a single day in battle. The larger than life, mercurial Brigadier Pritam Singh was ensnared in this web of deceit. In 1951, Poonch’s “Sher Bachha” faced a court-martial and was dismissed from service for moral misdemeanours of misappropriating approximately ?

10k and a carpet! In respect of a Commander with unlimited funds at his disposal, these were certainly petty charges. None other than General Thimayya, who was a defence witness stated, “Without Pritam, there would have been no Poonch, and with Poonch would have gone these carpets. Why are you crucifying this good soldier for nothing?”

After his court-martial Brig Pritam Singh said, “Sometimes serious doubts assail me whether it would have been better to have let the State Forces garrison to slip out and followed it, than to have put up a tenacious fight, but I dispel them with my conviction that I have done my duty to India and that one day the truth will come out.” Stripped of his rank and decorations, the hero of Poonch died unsung and unwept.

We have no such traditions, but Brig Pritam Singh deserves Special Presidential Pardon to restore his honour. Nations that treat their heroes shabbily do not produce them in great numbers!