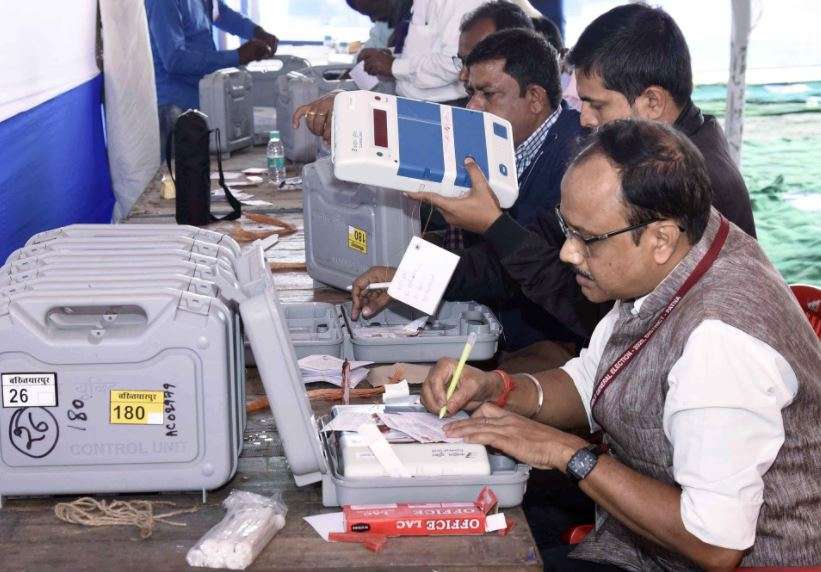 After the Congress failed to put up a good show in Bihar elections and bypolls elsewhere, party leaders on Tuesday again questioned the reliability of EVMs, even as the Election Commission asserted that the machines are “absolutely robust and tamper-proof”.

Former Madhya Pradesh chief minister Digvijay Singh and Dalit leader Udit Raj claimed that the electronic voting machines (EVMs) can be hacked and tampered with, though their party colleague Karti Chidambaram said the EVM system is accurate and dependable, and “it’s time to stop blaming the EVM”.

“What is the reason that no developed country is using EVMs… if a chip is there, then it is not tamper-proof,” Singh said, alleging “selective” rigging.

On Congress’ victory in assembly elections in Rajasthan and other states, he said the party did not win as many seats as it had expected.

The Congress leader, who was speaking after his party fared badly in the assembly bypolls in Madhya Pradesh, cited the recent US presidential elections.

Udit Raj, who is the Congress party’s national spokesperson and a former BJP MP from Delhi, also asked if Donald Trump could have lost in the US elections had EVMs been used.

“If the direction of satellites to Mars and Moon can be controlled from the earth, then why can’t EVM be hacked,” he said in a tweet in Hindi.

“If elections were held in America with EVMs, could Trump have lost,” he asked.

In another tweet, he took a swipe at the BJP, saying it has been able to sideline Nitish Kumar with its performance in Bihar.

Karti Chidambaram, the son of former finance minister P Chidambaram, however, said, “EVM system is robust, accurate & dependable. This has always been my view. I stand by it.”

“There have been doubters of the EVM from across political parties, particularly when the results don’t go in their favour. Till now no has demonstrated scientifically their claims,” he said on Twitter.

The Congress MP from Sivaganga said, “Whatever be the outcome of any election, it’s time to stop blaming the EVM. In my experience, the EVM system is robust, accurate and dependable.”

Deputy Election Commissioner in-charge of EVMs Sudip Jain, when asked about the charges, told reporters that the machines are absolutely robust and tamper-proof.

“It has been clarified time and again that EVMs are absolutely robust and tamper-proof. Even the Supreme Court has upheld their integrity more than once,” he said.

Jain recalled that in 2017, the Commission had offered an “EVM challenge” to political parties.
“The integrity of EVMs is absolutely without any doubts and merits no other clarification,” he said.

The NDA was maintaining its lead on Tuesday evening during the counting of votes for the 243 seats in Bihar.

The BJP was set to outperform its senior alliance partner JD(U) headed by chief minister Nitish Kumar, as per the trends.

Several exit polls had predicted a victory of the Mahagathbandhan of the RJD, Congress and the Left parties.