In a significant and uncommon development, the Vice Chief of Army staff has hit out at last month’s Budget and expressed deep concerns over ‘non-allocation of projected Capital budget for the Army for 2018-19’. Indian Army Raises Serious Concerns and if not taken care of, India will find it difficult to Modernise Indian Armed forces and counter Pakistan and China at the same time.

As part of his deposition to the Committee on Defence, Lieutenant General Sarath Chand said the following:

“The Budget of 2018-19 has dashed our hopes and most of what has been achieved has actually received a little set back. To highlight a few cases, the marginal increase in BE barely accounts for the inflation and does not even cater for the taxes. Allocation of Rs 21,338 crore for modernisation is insufficient even to cater for committed payment of Rs 29,033 crore for 125 ongoing schemes, emergency procurements and other DGOF requirements.”

He goes on to give the following assessment of the Armed Forces:

“We in the Army have identified as many as 25 projects for Make in India. However, there is not adequate Budget to support this. As a result of which, many of these may end up foreclosed.”

Referring to a plan to manufacture future ready combat vehicles:

“However, with the kind of Budget that has been allocated, this may get delayed by a few years. I am not sure what is going to be their future.”

He repeats the complaint of inadequate allocation with reference to infrastructure development along the northern borders, finally stating that there’s an overall shortfall of around Rs. 12,296 crore.

Here’s the full copy of the Vice Chief of Army Staff’s deposition: 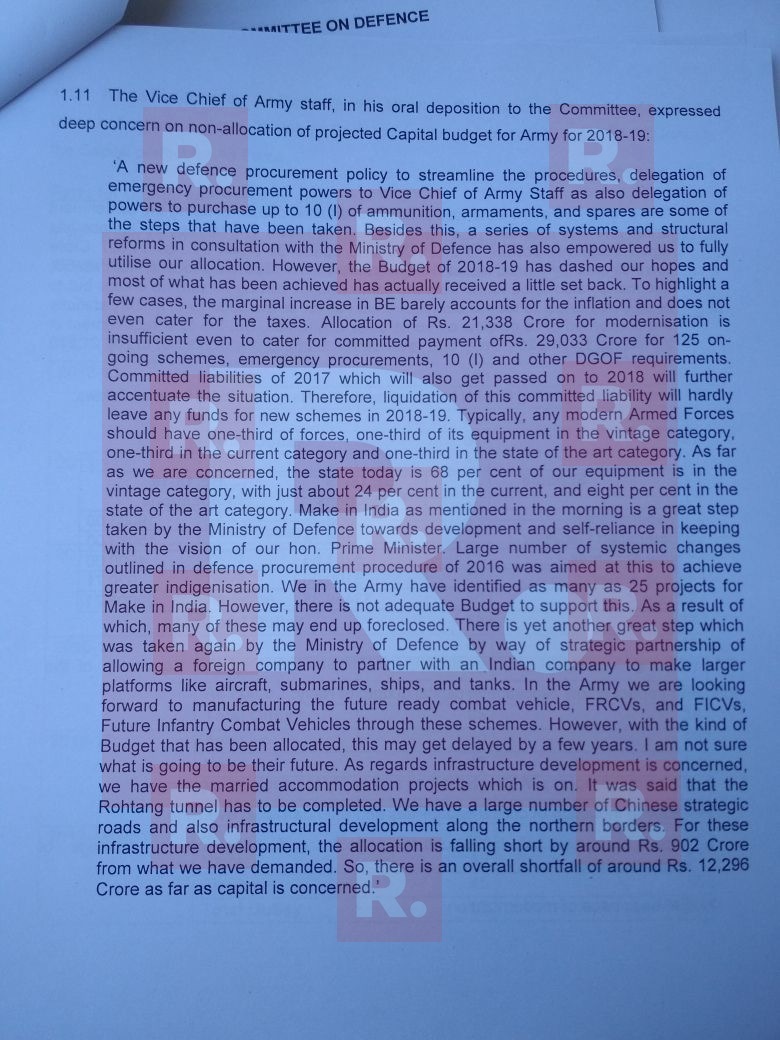