The Indian Navy participated in this multilateral maritime exercise involving 27 navies and made its presence felt in the Australian Waters. Indian Naval Ship SAHYADRI entered the Port of Darwin on Wednesday to take part in Exercise KAKADU which commenced on Saturday.

INS SAHYADRI is an Indian made Frigate constructed by Mazagaon Docks , Mumbai. This 6200 tons stealth frigate was commissioned into the Indian Navy in 20012. Thus very heavily armed ship has crew of 257 which includes 35 Officers. It carries two helicopters on board. This ship is part of the Eastern Fleet of the Indian Navy and has been winning the Best Ship of the Fleet award for quite some time. 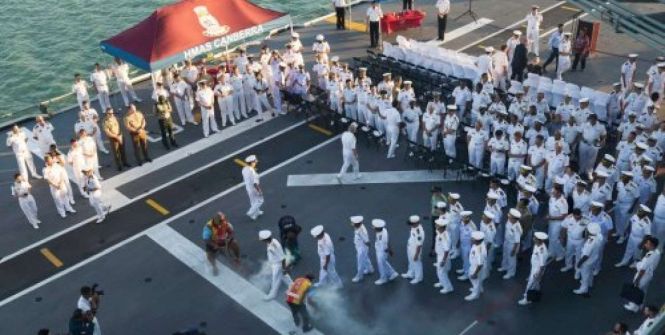 Indian Navy’s participation in KAKADU 2018 provided it with an excellent opportunity to engage with regional partners and undertake multinational maritime activities ranging from patrolling operations to high-end maritime warfare in a combined environment, aimed at enhancing interoperability and development of common understanding of procedures for maritime operations, the Navy said in a statement.

After having been deployed to the South China Sea and Pacific Ocean for over four months, which included representing Indian Navy in multinational exercises MALABAR 18 at Guam and RIMPAC 18 at Hawaii, INS SAHYADRI entered the Port of Darwin, Australia on 29 Aug 18 to participate in Exercise KAKADU 2018.

The exercise is held biennially in Darwin and the Northern Australian Exercise Areas (NAXA). Exercise KAKADU derives its name from Kakadu National Park, which is a protected area in the northern territory of Australia, 171 km south-east of Darwin.

Royal Australian Navy Tweets: Crocs feature but India dominates the field in Darwin – bringing nations closer together at Kakadu 2018. Congratulations to all those who took part in a sports day with a difference!

“KAKADU 2018 is a biannual joint exercise taking place both ashore and at sea off the coast of Darwin. This year’s exercise involves 27 nations and more than 3000 personnel which represents the largest military commitment to the exercise since it began in 1993,” Royal Australian Navy said in a statement.

From India, INS Sahyadri is taking part in the exercise. The ship was deployed in the South China Sea and Pacific Ocean for over four months, which included representing the Navy in multinational exercises MALABAR 18 at Guam and RIMPAC 18 at Hawaii. 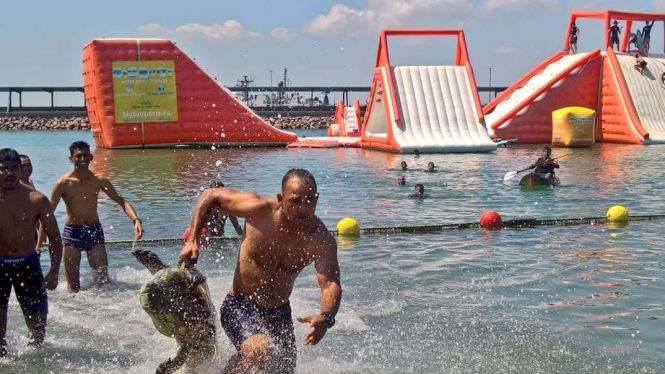 On Sunday, the teams participated in sports day where Indian team dominated all the others to lift the KAKADU18 Cup.

KAKADU 2018, the 14th edition of the exercise, scheduled from 29 August – 15 September 2018 saw participation from 23 warships, one submarine, 45 aircraft, 250 marines and approx 52 foreign staff from over 25 different countries. 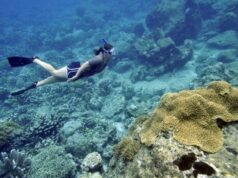 Life in the abyss