“He (Kejriwal) raised the point of airlifting oxygen, but did not know that it is already being done. He spoke about oxygen express by the railways but railway officials say that he has not communicated anything about it to the ministry,” the Central government source said. 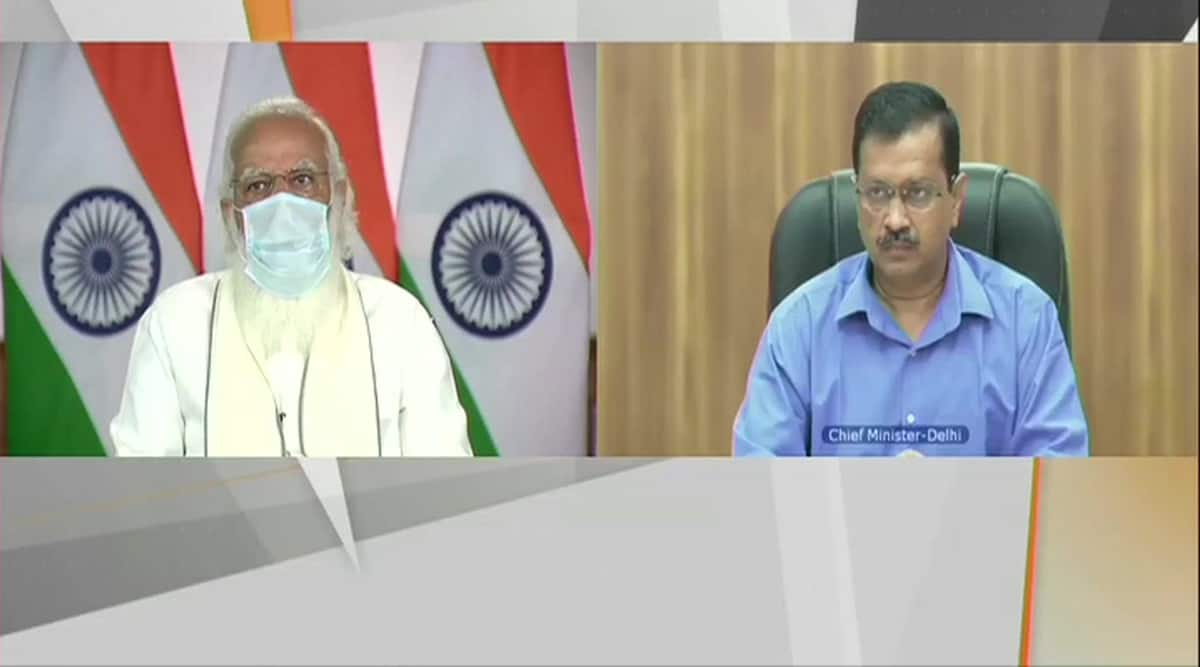 A sreengrab of the meeting between Prime Minister Narendra Modi and the Chief Ministers on Friday. (ANI)

Delhi Chief Minister Arvind Kejriwal’s televised comments during the interaction with Prime Minister Narendra Modi on Friday regarding pandemic situation in the national capital and acute oxygen crisis in hospitals has triggered a row, with the Union government officials accusing him of “playing politics”.

The officials also accused him of descending to a “new low” with his decision to broadcast the “private conversation” of the meeting.

“His entire speech was not meant for any solution but for playing politics and evading responsibility. All chief ministers spoke about what they are doing to improve the situation but he had nothing to say on what he is doing,” a source said, suggesting that his remarks, which were made public, have not gone down well with the central government.

“He (Kejriwal) raised the point of airlifting oxygen, but did not know that it is already being done. He spoke about oxygen express by the railways but railway officials say that he has not communicated anything about it to the ministry,” the Central government source said.

Responding to the sharp reaction of the Union government officials, the chief minister’s office (CMO) issued a brief statement, saying “today, the CM address was shared live because there has never been any instruction, written or verbal, from central govt that the said interaction could not be shared live.

“There have been multiple occasions of similar interactions where matters of public importance which had no confidential information were shared live. However, if any inconvenience was caused we highly regret that.”

During the meeting, Kejriwal said the Centre should take over all oxygen plants through the Army and requested Modi to direct chief ministers of all states to ensure smooth movement of oxygen tankers coming to the national capital.ADVERTISEMENThttps://3bd32abc9c7e772756f0f1edd220cbc4.safeframe.googlesyndication.com/safeframe/1-0-38/html/container.html?n=0

“We need a national plan to deal with the crisis. The Central government should take over all oxygen plants through the Army and every tanker coming out of the oxygen plant should be accompanied by an Army escort vehicle,” he said.

“The oxygen supply scheduled to come to Delhi from Odisha and West Bengal should either be airlifted or brought through the Oxygen express started by the Centre,” he said.

The chief minister also objected to different rates being charged from state governments and the Centre for the COVID-19 vaccine, and said “one nation, one rate” policy should be followed.

Union government sources alleged that Kejriwal has chosen to spread lies on vaccine prices despite knowing that the Centre does not keep one vaccine dose with itself and shares with states only.

Modi held a meeting on Friday with chief ministers of 10 states with the most number of COVID-19 cases. The meeting via video conferencing comes amid a huge surge in coronavirus cases, which have now clocked a daily total of over 3 lakh in the country.

Apart from Delhi, Chief ministers of Maharashtra, Uttar Pradesh, Kerala, Chhattisgarh and Madhya Pradesh are among those who attended the meeting.

Modi also held a meeting with leading oxygen manufacturers in the country via video conference amid concerns expressed by some states that their supply of the life-saving gas is running short with a number of hospitals, including many in the national capital, sending out SOS for immediate supply.https://open.spotify.com/embed-podcast/show/0ygP4jm9c9SdqUM3C6DycM#amp=1

Central government sources also noted that it has done a lot to boost health infra in the national capital, and referred to the DRDO facility with 500 ICU beds, which has been funded from the PM CARES Fund.

Bed capacity in the central government-run hospitals has been increased from 1090 to 3800, they said.

The per day oxygen allocation to Delhi has been increased from 378 MT to 480 MT, they said, adding that the movement of allocated oxygen supplies is being monitored on a real time basis.