Maldives, France, USA, Japan, Australia, And Others Mourn Death Of Indian Soldiers In Face Off With China 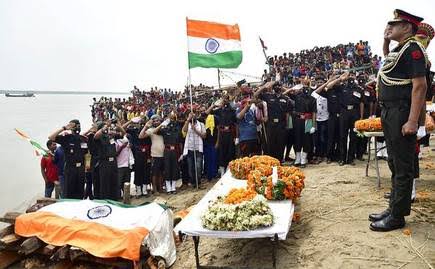 Maldives Foreign Minister Abdulla Shahid tweeted, “Maldives extends deepest condolences to the people of India for the lives lost in recent clashes on the border. Our thoughts and prayers are with the families, loved ones, and communities of the soldiers.”

Many Nations have mourned the killing of 20 Indian Army soldiers by Chinese troops in Galwan valley but refrained from condemning the Chinese action. US Secretary of State Mike Pompeo in a tweet said “we extend our deepest condolences to the people of India for the lives lost as a result of the recent confrontation with China. We will remember the soldiers’ families, loved ones, and communities as they grieve.”

In Delhi envoys of France, India’s closest strategic partner in Europe, Italy and Australia expressed deep sympathies over the loss of lives. “…my deepest sympathies go to the families of the Indian soldiers who lost their lives in the incident. India and China are both very important partners not only for Italy, but also for the European Union as a whole.

Both countries are crucial actors for regional and global stability,” Italian Ambassador to India Vincenzo de Luca told ET. French Ambassador Emmanuel Lenain in his tweet wrote, “Our heartfelt condolences to the people of India and our thoughts to the mourning families of the Indian soldiers who laid down their lives in the line of duty over the past few days.”

The US State Department earlier this week had said it was “closely monitoring” the situation between India and China and supported a peaceful resolution to the conflict. White House press secretary Kayleigh McEnany told reporters at the Thursday’s briefing that President Donald Trump was aware of the situation, while Assistant Secretary, Bureau of East Asian and Pacific Affairs, David R Stilwell said “we’re obviously watching the India-China border dispute very closely. This activity is similar to what we’ve seen in the past on border disputes with the PRC, and again, I would point you to those – I think it was 2014 when Xi Jinping travelled to India the first time.

The PLA invaded this contested area deeper and longer, with more people, than ever before historically. Again, whether that was a negotiating tactic or a – just a punch in the nose to demonstrate their superiority, I don’t know. But then we saw the Dokalam issue down near Bhutan, where we saw similar concerns. I wish I knew. Again, we don’t have a lot of visibility and we don’t have a lot of open dialogue with our Chinese counterparts, and honestly I’d like to see more of that if we can.”