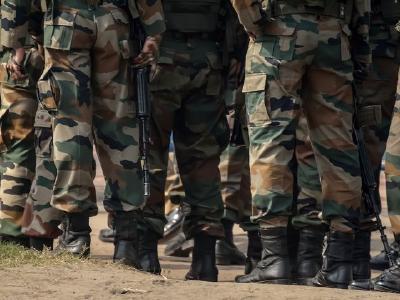 Both the NSCN and the ULFA (I) have been setting up many new transit camps in the Arunachal Pradesh, as apart from the existing Nagaland camps, the terrorists have also chosen Arunachal Pradesh for their safe shelter in recent times.

Therefore the Indian Army has now stepped up joint operations on Arunachal- Assam border and Assam – Nagaland border with the Indian security forces comprising CRPF, Assam Police and Arunachal Police. During their search operation against terrorist outfits, they have been successful in apprehending many cadres and supporters of the terrorist outfits.

A militant, Bhutan Mech was arrested near Halwating of Sivasagar district with One revolver and three rounds live bullets. Army and Security forces also nabbed Nekib Ahmed from South Sonari of Charaideo district same night following secret input. Nekib was an active linkman of the banned ULFA (I) and he sent several youths from Charaideo district to join the outfit. Many objectionable documents were reportedly recovered from his possession. He also allegedly operated many fake Facebook accounts to lure youths to join the outfit.

In another incident that took place few days ago in the Assam-Arunachal Pradesh border area, one hardcore terrorist was arrested during joint operations of the Army and the Security Forces. Mukunda Nath of Sivasagar Bokota Nemoguri village was involved in the sensational Demow bomb blast incident that had taken place in the Demow daily market area near the NH-37 on 22 November 22. Demow Police have taken the accused under judicial custody for more interrogation regarding the bomb blast with permission from the Sivasagar CJM court.

Besides, as many as three youths were held from the Assam-Arunachal border area and the detained youths are suspected ULFA (I) and NSCN linkmen. Suspected members and linkmen of the ULFA (I) and the NSCN are active in the Bimalapur, Kanubari and Balijan areas of Charaideo district and special joint operations were launched in these areas the past week.

Moreover, in the Dikhowmukh, Saraguri, and the Brahmaputra-Dikhow Sapori area and in the Saragua area of Sivasagar district, a team of the Indian Army, CRPF and the Assam Police jointly launched another search operation against a troop of suspected ULFA (I) militants. Sources informed that a large troop of militants were taking shelter in these areas.