A crispy, crunchy noodle-like snack, omapodi is something you won’t be able to resist after one bite!

You can pair Omapodi as is with your evening tea or top it with chutneys for a lip-smacking chaat.

If you are someone who needs to try something new every time hunger strikes – welcome to the club! The struggle is real and we understand how every time your favourite namkeen, sandwich or those cookies might not satiate you as much as a new snack would. And who says you have to make-do with whatever you have ready in the kitchen when you can toss up a few simple ingredients for yummy snacks? Indian regional cuisines never disappoint when it comes to snacks to satisfy not just hunger but also taste buds!

South Indian cuisine boasts of many such snacks which aren’t just quick and delicious but are super easy to make. From simple murukku to banana chips, from idli to uttapam, there are options galore and many of them go beyond the usual. Omapodi, for instance, is a snack from Tamil Nadu which can serve as a perfect munch while you are working at home, on a long road trip, movie or game night or simply when you are bored and hungry! Omapodi is basically the popular sev namkeen but the difference lies in the spices since omapodi uses omam (also known as ajwain) in its recipe while sev is usually without any spices. A crispy, crunchy noodle-like snack, omapodi is something you won’t be able to resist after one bite! You can pair it as is with your evening cuppa or top it with chutneys and sauces for a lip-smacking chaat.

Omapodi is basically the popular sev namkeen but the difference lies in the spices.

The traditional recipe uses special equipment called sev-maker which basically cuts the dough into thin, noodle-like shapes. But if you don’t have it at home, you can simply rub the dough for omapodi on a grater or a ladle with small holes. To make omapodi at home, all you need is besan (gram flour), rice flour, ghee and a couple of spices, all of which you can find in your home! You can even use wheat flour instead of rice flour, if not available. Simply knead a smooth dough of ajwain powder, mixed with flours, water and spices including turmeric, chilli powder and asafetida, along with hot oil or ghee. Heat oil in a deep wok and pass a small amount of dough through a grater or ladle with holes in such a way so they come out in the form of thin noodles and deep fry until crunchy. Repeat with the entire dough and serve hot and fresh. 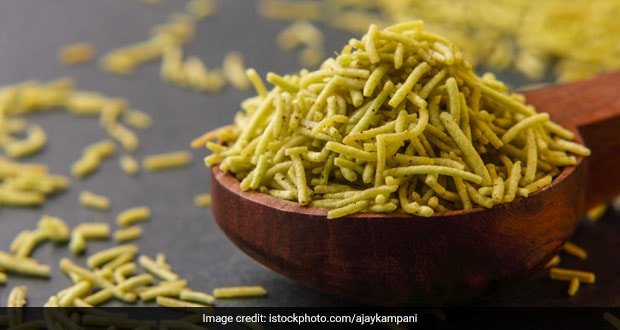 About Omapodi Recipe: A popular snack from Tamil Nadu, omapodi is basically sev, deep-fried until crisp and golden and comes with the flavour of a whole lot of spices!

BJP Back in all 6 Civic Bodies In Gujarat, Cong Wiped Out, AAP Enters

Why the Trinamool is gunning for BJP over early deployment of central forces?