Addressing an election rally in Thrissur, Priyanka Gandhi said there was nothing more hollow than quoting from the Bible “to sow seeds of division and hatred in the country”. 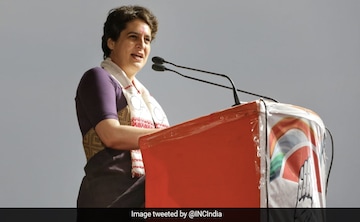 “I suppose this was because the elections in Kerala are around the corner,” Priyanka Gandhi said.

Congress leader Priyanka Gandhi on Wednesday took on Prime Minister Narendra Modi for “quoting” from the Bible at a poll rally and nothing for the nuns harassed by “goons” belonging to his party during a train journey through BJP-ruled Uttar Pradesh recently.

“I suppose this was because the elections in Kerala are around the corner. Because I didn’t hear a single word about the sisters who were harassed in Jhansi,” she said, a day after PM Modi targeted the ruling LDF over the gold smuggling scam in a poll rally in Palakkad, saying the CPI(M)-led government “betrayed” the people,just as Judas did to Jesus for a few pieces of silver”.

Addressing an election rally here, Ms Gandhi said there was nothing more hollow than quoting from the Bible “to sow seeds of division and hatred in the country”.

She said she has worked for many years with the nuns belonging to Mother Teresa’s Missionaries of Charity in Delhi, who taught her how to clean the wounds of the destitutes.

“They showed me the dignity of service. And today when I meet them often, they tell me of how they are persecuted,” she said.ADVERTISEMENT

Hitting out at the Prime Minister, the Congress general secretary said she found it very interesting when PM Modi “quoted from the Holy Bible”.

“There is nothing more farcical than quoting the lines of Jesus on a political stage and unleashing the prosecution on those whose lives are spent on serving the poor,” Ms Gandhi said.ADVERTISEMENT

She said it was Jesus Christ who exposed the tyranny of a ruler, whose greed and selfishness ravaged his people.

Slamming the Centre, she said everybody knows how the central government, headed by Pm Modi, has “divided our own country in the name of religion”.

PM Modi sought to link the betrayal of Jesus by Judas in exchange for money, to the gold smuggling case in the rally held during the Holy Week being observed by the Christian community.

During Holy Week, Christians recall the events leading up to Jesus death by crucifixion,his betrayal by Judas during the week in exchange for money, and, according to their faith, Jesus’ Resurrection.

Judas was one of the 12 Apostles of Jesus.

On Monday, union Railway Minister Piyush Goyal had dismissed as wrong, the charges that two nuns and two postulants belonging to a Kerala-based congregation were attacked during a train journey via Uttar Pradesh recently and alleged that Chief Minister Pinarayi Vijayan was “making false statements” on the issue.

Vijayan on Tuesday dubbed Goyal’s statement as ‘shameful’ and an ‘utter lie’.

The alleged incident occurred at Jhansi railway station on March 19 had its echoes in poll-bound Kerala last week with Vijayan taking it up with the Centre and Home Minister Amit Shah promising strong action.