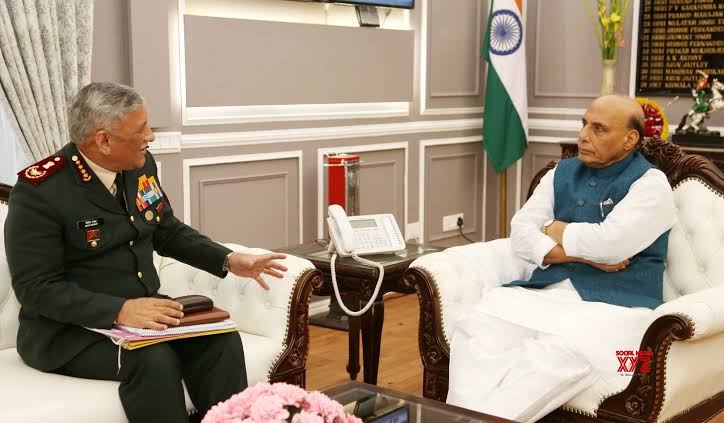 Raksha Mantri was given a detailed account on the overall situation in eastern Ladakh by Army Chief Gen MM Naravane at a high-level meeting which was also attended by Chief of Defence Staff Gen Bipin Rawat, Navy Chief Admiral Karambir Singh and Air Chief Marshal RKS Bhadauria, they said

Rajnath Singh, the Raksha Mantri on Friday reviewed India’s overall military preparedness in eastern Ladakh and several other areas along the Line of Actual Control in Sikkim, Uttarakhand and Arunachal Pradesh even as Chinese and Indian armies held another round of Major General-level talks on the current border standoff, official sources said.

Shri Rajnath Singh was given a detailed account on the overall situation in eastern Ladakh by Army Chief Gen MM Naravane at a high-level meeting which was also attended by Chief of Defence Staff Gen Bipin Rawat, Navy Chief Admiral Karambir Singh and Air Chief Marshal RKS Bhadauria, they said.

The Indian and Chinese armies are locked in an over five-week standoff in Pangong Tso, Galwan Valley, Demchok and Daulat Beg Oldie. The two sides have deployed additional troops along the LAC in North Sikkim, Himachal Pradesh, Uttarakhand and Arunachal Pradesh following the standoff.

It is understood that Singh told the top military brass to continue to deal with the situation in eastern Ladakh and other areas with “firmness”.

The Raksha Mantri carried out a comprehensive review of the situation in eastern Ladakh.

Military sources said the two armies held another round of Major General-level talks on Friday to find a way out to defuse tension in eastern Ladakh.

India on Thursday said it is maintaining military and diplomatic engagements with China to peacefully resolve the row at the “earliest”.

In the next one week, the field commanders of the two sides are slated to hold a series of meetings to discuss specific measures to defuse the tension.

On Wednesday, the two sides held Major General-level talks in an positive atmosphere with an aim to end the bitter tussle.

In the over four-and-half-hour dialogue, the Indian delegation pressed for total restoration of status quo ante and immediate withdrawal of thousands of Chinese troops from the areas which India considers on its side of the LAC, the sources said.

In Friday’s meeting too, India reiterated its demand, they added.

After the standoff began in early last month, Indian military leadership decided that Indian troops will adopt a firm approach in dealing with the aggressive posturing by the Chinese troops in all disputed areas of Pangong Tso, Galwan Valley, Demchok and Daulat Beg Oldie.

The Chinese Army has been gradually ramping up its strategic reserves in its rear bases near the the Line of Actual Control (LAC) by rushing in artillery guns, infantry combat vehicles and heavy military equipment, the sources said.

The trigger for the face-off was China’s stiff opposition to India laying a key road in the Finger area around the Pangong Tso Lake besides construction of another road connecting the Darbuk-Shayok-Daulat Beg Oldie road in Galwan Valley.

The road in the Finger area in Pangong Tso is considered crucial for India to carry out patrol. India has already decided not to stall any border infrastructure projects in eastern Ladakh in view of Chinese protests.

The situation in the area deteriorated after around 250 Chinese and Indian soldiers were engaged in a violent face-off on May 5 and 6. The incident in Pangong Tso was followed by a similar incident in north Sikkim on May 9.

Both sides have been asserting that pending the final resolution of the boundary issue, it is necessary to maintain peace and tranquility in the border areas.