Those associated with the event clarified that the gathering had nothing to do with putting together a Third Front. 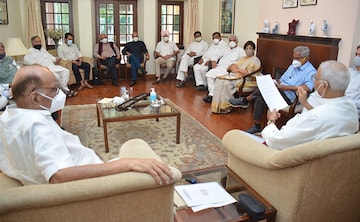 Eight political parties were present at the meeting

“The meeting was called by Yashwant Sinha, not Sharad Pawar, this was not a political meet,” stressed Majeed Memon, a leader of Mr Pawar’s Nationalist Congress Party (NCP). For the NCP, leaving out the Congress, its ally in Maharashtra, would be awkward.

“There are talks that the meeting was for a third front without the Congress, which is not the truth. There is no discrimination. We called all like-minded people. We also invited Congress leaders. I called Vivek Tanha, Manish Tiwari, Abhishek Manu Singhvi, Shatrughan Sinha for the meeting. They couldn’t come. It’s not true that we didn’t invite Congress,” Mr Memon asserted, when reporters asked why the Congress was MIA at a gathering of opposition parties.

National Conference leader Omar Abdullah, RLD’s Jayant Choudhary, the Samajwadi Party’s Ghanshyam Tiwari; AAP leader Sushil Gupta; CPI’s Binoy Viswam and CPM’s Nilotpal Basu were among those who attended the meet. “It was not a political meeting but an interaction among like-minded people. Issues like Covid management, ‘attack’ on institutions and unemployment were discussed,” Nilotpal Basu told reporters.

With Mr Pawar, one of India’s most experienced politicians and a skilled negotiator, playing host, the meeting was projected by many as early steps towards forming an opposition front to take on Prime Minister Narendra Modi and the BJP in the 2024 national election.

However, those associated with the event clarified that the gathering had nothing to do with putting together a Third Front.

Sources close to Sharad Pawar said neither he nor his party had put out any invitations. “This is a highly overrated and speculative meeting,” they said.

The speculation intensified when the meeting was linked to Mr Pawar’s meeting with ace poll strategist Prashant Kishor earlier yesterday.

This was their second meeting in two weeks. But hours later, Prashant Kishor distanced himself from today’s meeting and ruled out any association with an opposition front to take on the BJP in the next general election.

“I don’t believe a Third or Fourth Front could emerge as a successfully challenge to the current dispensation,” he told NDTV, adding that the ‘tried and tested’ Third Front model was archaic and not suited to the current political dynamic.