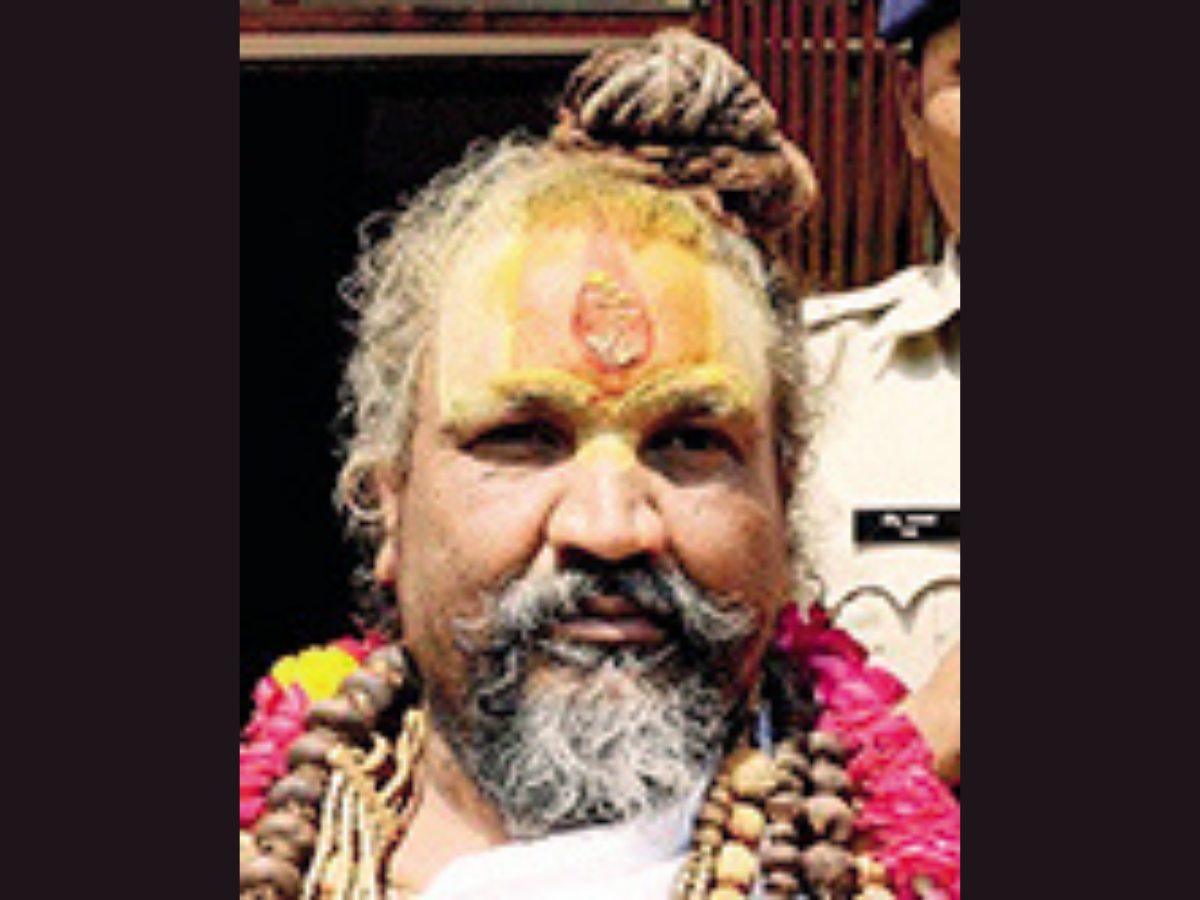 The Madhya Pradesh government razed Computer Baba’s ashram in Indore’s Hatod area on Sunday for alleged encroachment of 2 acres of state-owned land. He is now in jail along with a few followers.

Computer Baba aka Namdev Das Tyagi, who was given MoS status by the Shivraj Singh Chouhan government in 2018 and the Kamal Nath government, was detained along with six others when he tried to protest the demolition.

Indore DIG Harinarayanchari Mishra said police have arrested Computer Baba and six others under section 151 of CrPC. “They were produced before a magistrate, from where they were sent to jail. We have kept them in central jail,” said Mishra.

Indore collector Manish Singh told TOI that seven persons have been taken into police custody and sent to Central Jail under Section 151 of CrPC as a preventive measure after they tried to obstruct the administrative action.

A 315-bore rifle, an airgun, a pistol and a kirpan were found in the ashram, along with airconditioners, refrigerators and LED television sets.

Computer Baba canvassed for Cong ahead of bypolls

Computer Baba had carried out a villageto-village ‘save democracy’ campaign for Congress ahead of the November 3 bypolls in Gwalior-Chambal region.

The Indore collector said that the 2-acre land near Gomatgiri in Jambudi Hapsi village of Hatod, on the outskirts of Indore, was illegally occupied.

“We had served a showcause notice in the name of the occupants, but they were not ready to vacate it, so we went ahead and removed the encroachment by force,” he said.

The reserved land, estimated to be worth Rs 80 crore, had been handed to the local gram panchayat for the construction of a cowshed in 2000.

A joint team of district administration, police and officials from Indore Municipal Corporation (IMC), led by ADM Ajay Dev Sharma, turned up at the ashram at 6.30am, taking those living there by surprise.

With armed police standing guard, some 150 IMC personnel began the demolition around 7.15am. By 12.30pm, Computer Baba’s 12-room ashram, office, drawing room and three tin-sheds were turned to rubble.

The administration says it has started an inquiry after getting a complaint that Computer Baba has encroached tracts of land that are in dispute, including some forest land near the Super Corridor.
The razing of the ashram sparked a political row with Congress Rajya Sabha MP Digvijaya Singh saying:

“Computer Baba’s ashram and temple are being demolished without issuing any notice with an intention of revenge. This is the height of political vendetta. I condemn it.”

Congress MLA from Depalpur, Vishal Patel, also opposed the action and threatened to launch a protest along with people of Kalota community if any damage were caused to a temple built on the land. “BJP government’s razing of ashrams, temples and colleges is dirty politics. If even a brick of the temple is taken away, I and the Kalota community will take to the streets and district administration will be responsible for it,” he warned.

BJP state chief VD Sharma said: “This is a BJP government. It will take action against everyone involved in illegal businesses and encroachment and in illegal possession on gaushalas. Computer Baba had encroached upon gaushala land. The public will say whether the land belongs to Computer Baba or gaushala. This land has been vacated.”

After the demolition, a group of people from Jain Community met Indore MP Shankar Lalwani and submitted a memorandum to be passed on to CM Chouhan, thanking him for freeing the land from encroachment. They also demanded the administration take up construction of a cowshed on priority, and develop the area as a religious place.