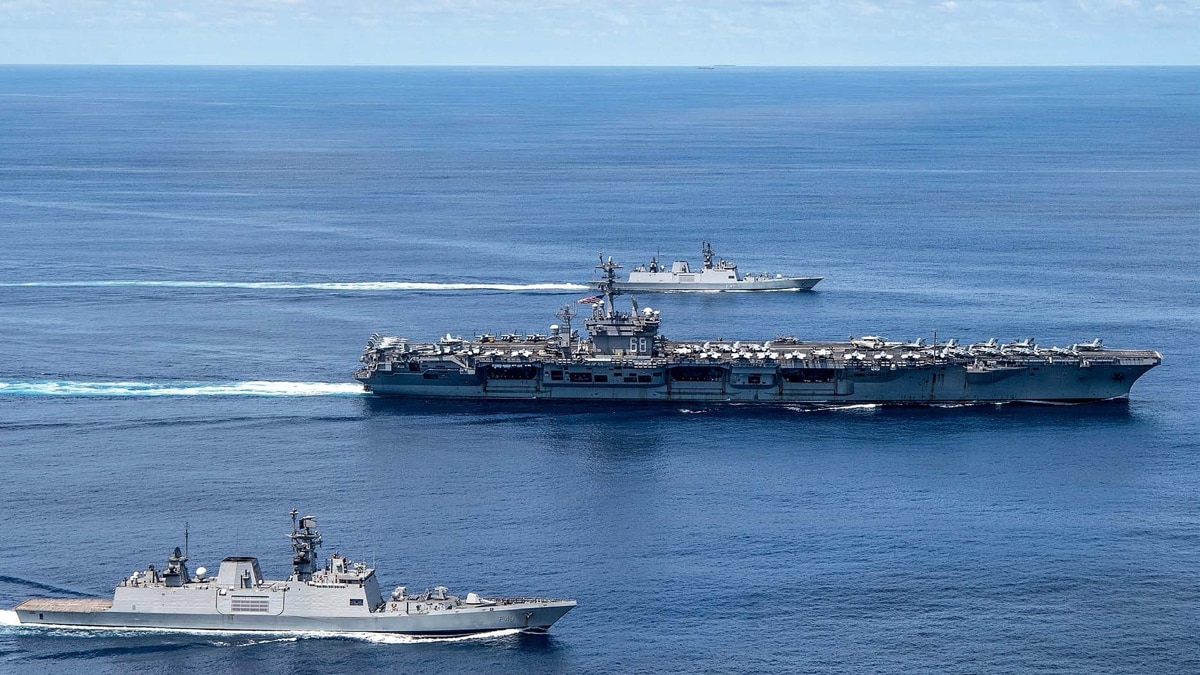 The world’s largest navy is aggressively expanding its presence in the Indian Ocean region. They stand no chance India’s plan to take on the Chinese plan
Maritime forces have the unique ability to provide diplomatic leverage round-the-year, which armies and air forces can provide only when things get very tense between countries, says Rear Admiral Sudarshan Shrikhande, former assistant chief of naval staff (foreign cooperation and naval intelligence).

The Malabar 2020 exercise between India, Japan and the US due next month will be closely watched for whether it includes the Australian navy.

New Delhi has in the past been very angry with Australia because Aussies had backed out of Malabar Exercise at the last minute, afraid of riling Beijing. So now including Canberra would be a “political decision” only if the Australians are ready to stand up and face the Chinese.

In its annual report to the US Congress, presented on September 1, the US defence department mentioned how PLAN, with 350 warships and submarines, is now numerically the world’s largest battle force on water, outstripping the US navy’s 296 warships.

Over the past decade, it has added 117 major combatants, including submarines and landing platform dock ships, equivalent to an entire Indian navy. It has inducted two aircraft carriers and is building two more.

Each combatant has brought in a quantum jump in capabilities with advanced anti-ship, anti-air and anti-submarine weapons and sensors. The PLA’s first Type 055 class destroyer, comm-issioned this January, is armed with 112 vertical missile launchers, more than twice the missile load of an Indian destroyer.

The PRC’s 2019 defence white paper described the PLAN as speeding up transition of its tasks from ‘defence on the near seas’ to ‘protection missions on the far seas’. Last December, it lengthened the pier on its first overseas base in Djibouti to accommodate aircraft carriers and nuclear submarines. Its 36th anti-piracy pat¬rol, comprising three warships (ongoing since 2008), entered the Indian Ocean this year.

Some one has painted a very far fetched scenario —–It’s December 2025 and ‘Exercise Sea Dragon’ has begun. The world’s largest navy has bided its time for decades and is now ready to project power beyond its shores.

‘Sea Dragon’ is meant to test PLAN’s responsiveness to maritime operations against a distant adversary, the official release says. Four Shang class submarines circle the east and west coast of India, two on either coast conducting ‘barrier patrols’, leaving no doubt as to who this distant adversary is.

In Delhi, the Maritime Domain Awareness panels in the navy’s maritime operations room paint a picture of the PLAN mission, an envelopment of the Indian subcontinent. No merchant ship or warship headed in or out, can sail without being targeted.

The PLAN’s IOR moves are ostensibly to allay China’s ‘Malacca Dilemma’, the fact that over 80 per cent of its energy supplies are shipped through the narrow Malacca Straits. But in a climate of mistrust, borne out of Beijing’s belligerence, it is looked at otherwise.

The scenario of China’s naval rise is in contrast to budgetary issues for the Indian Navy and a slow accretion in force levels. Its share of the budget has shrunk from a high of 18.3 per cent in 2013 to 15 per cent this year.

This fall, naval officials say, is the result of acquisition plans for multi-role helicopters and landing platform docks not fructifying. The navy will issue a Request for Proposal for building six Project 75I submarines which it hopes to start acquiring by 2026 onwards to replace an ageing fleet of a dozen submarines.

The navy’s first indigenously built aircraft carrier, the 40,000-tonne INS Vikrant, will head out for sea trials soon and will be inducted by October 2021. The navy must plan for a second aircraft carrier, the 60,000 tonne IAC-2 which it wants to induct into service by 2035, as ‘non-negotiable’.

A budgetary freeze seems inevitable given the present state of the economy, and the service is looking at reprioritising its acquisitions, replacing assets like minesweeping warships in favour of unmanned platforms, cutting back the number of additional P-8Is from 10 to six and going in for indigenous solutions.

The force is tweaking its mission-based deployments (MBD), a 2016 strategy of positioning warships round-the-clock in six key maritime chokepoints of the Indian Ocean region, the Gulf of Aden, North Arabian Sea, Persian Gulf, northern and southern Indian Ocean and the Malacca Straits.

Key to this strategy are the induction of assets like the eight MQ-9 Guardian drones and eight additional P8-I Poseidon long-range maritime surveillance aircraft from the US. The Guardian, for instance, can float 15 km above chokepoints for 30 hours at a stretch.

“We maintain effective domain awareness in our primary areas of interest and can deploy rapidly in case of any emergent situation,” says Vice-Admiral G. Ashok Kumar, Vice-Chief of Naval Staff.

“In order to facilitate maritime security, we also maintain combat-ready platforms on mission-based deployments, with additional forces in readiness.”

On July 20 this year, the US sent the USS Nimitz carrier strike group into the IOR for joint exercises with the Indian navy. It was a very visible symbol of support, a month after the bloody clashes between the Chinese PLA and Indian Army left over 20 Indian and an unspecified number of Chinese soldiers dead. This is the kind of coalitional leverage that India is building up with larger maritime powers to counter-balance a rising China.

A key aspect of increasing the reach of its aircraft and warships through the IOR are the logistics support agreements (LSA) with France, Singapore, the United States, Australia and, more recently, Japan (LSAs allow countries to use each other’s bases for refuelling). New Delhi has also struck common cause with a close grouping alarmed by the rise of China, the Quadrilateral Security Dialogue, a grouping of India, Australia, the United States and Japan.

‘The Quad’, proposed in 2006 by former Japanese prime minister Shinzo Abe, had been shelved but was revived last year in the face of an assertive Beijing. An in-person October 6 meeting of the ‘Quad’, called at India’s behest in August, saw the foreign ministers of the countries involved get together in Tokyo.

The meeting was hugely symbolic as it comes at a time when all four have seen ties with Beijing plummet. While US secretary of state Mike Pompeo openly lashed out at China, the three other countries including India were ambivalent about naming the country responsible for drawing them closer.

There is no evidence the Quad can be militarised into an Asian NATO with an ‘attack on one is an attack on all’ clause. In any event, it will be the maritime domain which is likely to see the greatest cooperation.