“Only Grows Beard, Names Stadium After Himself”: Mamata Banerjee On PM

Campaigning for the West Bengal elections has seen leaders from the Trinamool and the BJP making caustic attacks at each other. 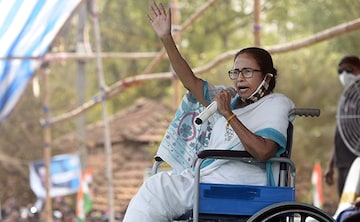 Mamata Banerjee hit back at PM Modi and Amit Shah at a rally in Bengal.

West Bengal Chief Minister Mamata Banerjee on Friday lashed out at Prime Minister Narendra Modi and Union Home Minister Amit Shah a day before the state begins voting in a closely-watched, flipping back their accusations of the ruling Trinamool Congress runs extortion syndicates.

“They have two syndicates. One is a rioter, has sponsored riots in Delhi, Gujarat and UP. And the other one… has slowed industrial growth but is only growing his beard. Sometimes he puts himself above Gandhi ji, above Rabindranath Tagore, sometimes calls himself Swami Vivekananda and names stadiums after himself. One day he will sell the country too and name it after himself. Something is wrong with their head. It seems a screw is loose,” she said.

Painting PM Modi as a self-absorbed leader who renames stadiums after himself and has his photographs printed on coronavirus vaccination certificates, Ms Banerjee has often said the day is not far when the country will be renamed after him.

“The Prime Minister has named a stadium after him. He has put his photographs on COVID-19 vaccination certificates. He is making ISRO send his picture to space. A day will come when the country will be named after him,” Mr Banerjee had said earlier this month.

West Bengal will hold elections in a record eight phases starting March 27 in a contest that has seen the BJP pull out all stops, including poaching a large number of Trinamool leaders, to unseat the two-time Chief Minister. Votes will be counted on May 2.

Campaigning for the elections has seen either side making caustic attacks on each other. On Thursday, Bengal BJP chief Dilip Ghosh, shredded by political leaders over his shocking comment that Mamata Banerjee should wear Bermuda shorts if she wished to show off her legs, doubled down on the statement, saying it is “inappropriate” for a sari-clad woman to show her legs.